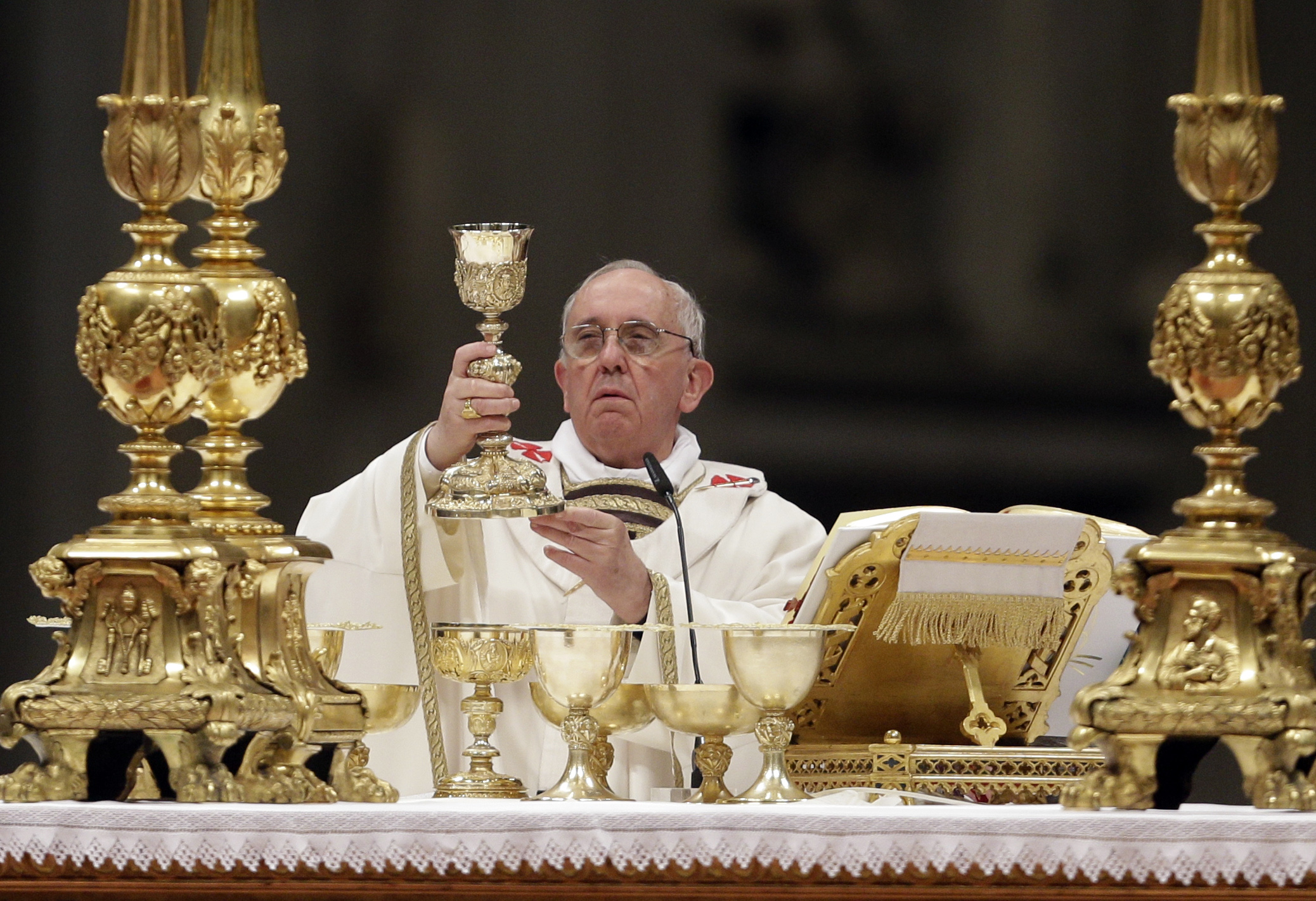 VATICAN CITY Pope Francis celebrated a trimmed back Easter Vigil service Saturday after having reached out to Muslims and women during a Holy Week in which he began to put his mark on the Catholic Church.

Francis processed into a darkened and silent St. Peter's Basilica at the start of the service, in which the faithful recall the period between Christ's crucifixion on Good Friday and resurrection on Easter Sunday.

One of the most dramatic moments of the Easter Vigil service that usually follows — when the pope would share the light of his candle with others until the entire basilica twinkled — was shortened this year as were some of the Old Testament readings.

The Vatican has said these provisions were in keeping with Francis' aim to not have his Masses go on too long. The Easter Vigil service under Benedict XVI would typically run nearly three hours. The new pope has made clear he prefers his Masses short and to the point: he was even caught checking his watch during his March 19 installation ceremony. Saturday was no different: The vigil ended just shy of 2.5 hours.

A trimmed-back vigil — and one that started earlier than usual — was just one of the novelties of this Holy Week under an Argentine Jesuit pope who just two weeks ago stunned the world by emerging from the loggia of St. Peter's Basilica after his election with a simple "Brothers and sisters, good evening."

He riled traditionalists but endeared himself to women and liberals by washing and kissing the feet of two young girls during a Holy Thursday Mass at a juvenile detention center in Rome, when the rite usually calls for only men to participate. A day later, Francis reached out with friendship to "Muslim brothers and sisters" during a Good Friday procession dedicated to the suffering of Christians from terrorism, war and religious fanaticism in the Middle East.

In his homily Saturday, Francis kept his message simple and tied to the liturgical readings, recalling how Jesus' disciples found his tomb empty a day after his death and were surprised and confused.

"Our daily problems and worries can wrap us up in ourselves, in sadness and bitterness, and that is where death is," he said. "Let the risen Jesus enter your life, welcome him as a friend, with trust: he is life!"

Just a few hours after the vigil ends, Francis on Sunday will celebrate Easter Mass and deliver his "Urbi et Orbi" speech, Latin for "To the city and the world." Usually the pope also issues Easter greetings in dozens of languages.

In his two weeks as pope, Francis' discomfort with speaking in any language other than Italian has become apparent. He has even shied away from speaking Spanish when the occasion would call for it, though the Vatican has said he has done so to avoid discriminating against other languages by favoring his native tongue.

Italian is the lingua franca of the Vatican and Francis has emphasized his role as bishop of Rome over that of pope of the universal church, making his use of Italian logical.

It's not clear how Francis will handle the multilingual greetings Sunday.

Typically, after the busy Easter week ceremonies, the pope would go to the papal retreat at Castel Gandolfo for a few days of vacation. Francis can't do that since the previous pope, Benedict XVI, is currently living there in retirement.

The Vatican has said Francis would stay put in the Vatican.