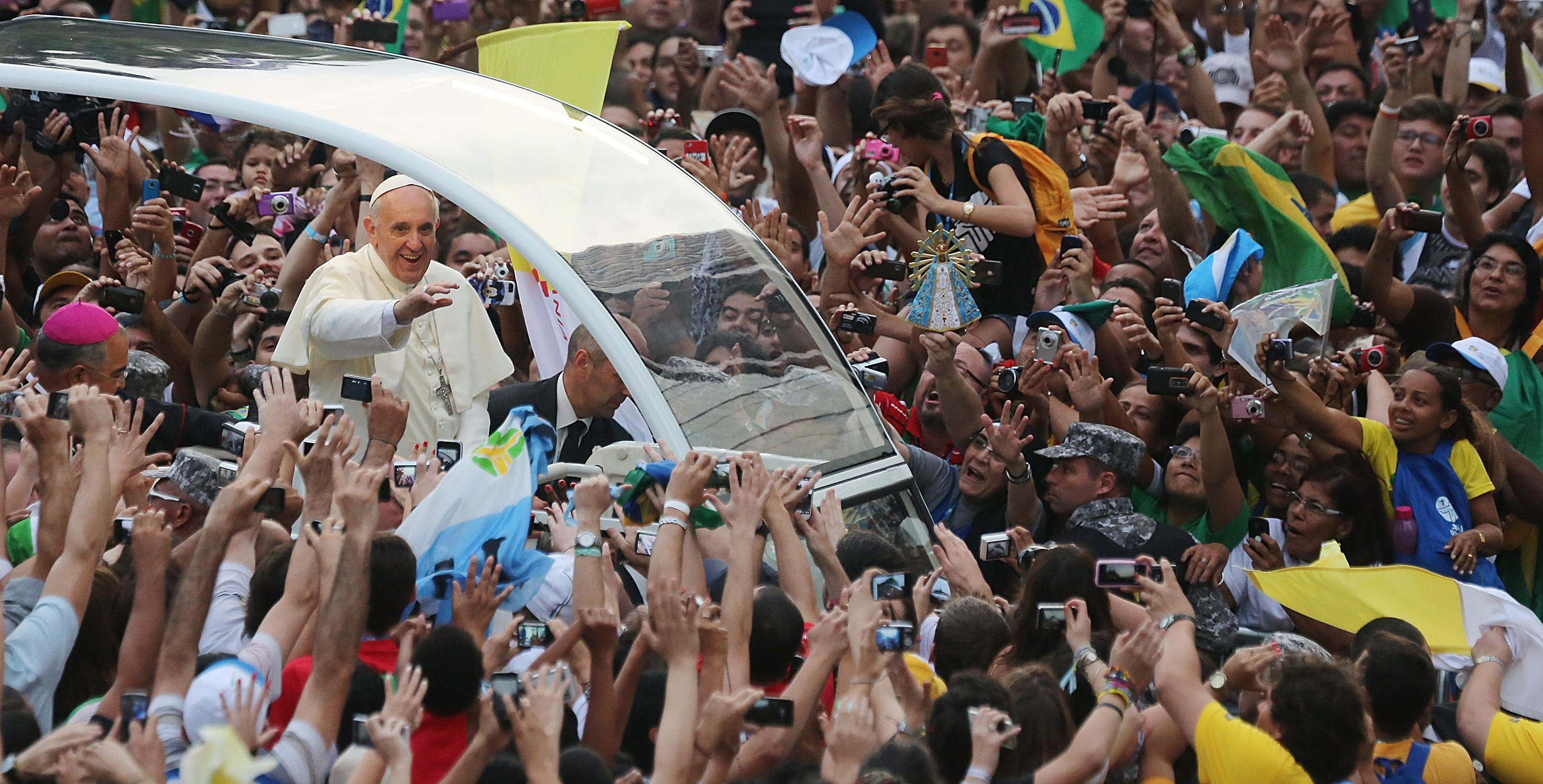 RIO DE JANEIRO There was widespread finger-pointing on Tuesday over the security scheme meant to protect Pope Francis during his seven days in Brazil after a frantic crowd of faithful Catholics repeatedly surrounded and halted the vehicles he was riding in as he paraded down main avenues.

But one of biggest hurdles to avoiding such mob scenes is Francis himself. The pope has repeatedly said he wants the church to go out among the masses, a practice he has personally adopted.

The "slum pope," as was dubbed in his native Argentina for the amount of time he spent in impoverished areas most people consider dangerous, smiled as his car was mobbed Monday shortly after his arrival in Brazil. He kept his window rolled down and even kissed a baby passed into the vehicle by its mother.

"I was so surprised! Maybe I'm looking at it from a foreign perspective, but it seemed odd that the people were allowed that close on the roads," said the Rev. Joseph Tan, a priest from the Philippines, echoing the reaction of many in Rio for the papal visit. "In the Philippines, people would have gathered to get a glimpse, but nothing like what we saw. But that's the pope's personality, he was just being himself."

Papal spokesman Rev. Federico Lombardi made clear that despite the mobs, Francis wouldn't change his decision to use an open-air vehicle and specifically planned to use the open car for the very events expected to draw the largest crowds: a speech on Copacabana beach on Wednesday, a Way of the Cross procession on Friday, and a weekend vigil and Mass in a rural part of Rio.

Lombardi said the pontiff deliberately chose to use the same car he uses in St. Peter's Square, and not the bulletproof popemobile, to be closer to people and interact with them. But that square is a closed and controlled; Vatican and Italian police ring the square, the faithful are fenced into pens, and bodyguards trail the car at all times.

But how Vatican and Brazilian authorities decide to organize his security going forward is ultimately not the pope's responsibility, Lombardi said. "Obviously he desires to have a possibly very direct contact with the people. This is clear, and not a militarization of the situation," said the spokesman. "But the concrete solutions are not chosen by him."

Figuring out how to keep this hands-on pontiff safe is now the nightmare chore for Brazilian security forces. The Federal Police are mostly in charge of the pope's security in Brazil, though when he travels to a rural part of Rio this weekend, the army will secure the massive pasture where he'll celebrate Mass.

On Tuesday, authorities blamed each other for the traffic fiasco the day before.

The day before, on Monday night, police fired rubber bullets and tear gas into large crowds, reports CBS News correspondent Dean Reynolds. The protestors rallied against the government for what they believe is money wasted on the pope's visit - in excess of $52 million, according to published reports.

Just before the violence erupted, Pope Francis offered faith to those frustrated with rising prices and corruption.

Officials with the Federal Police who have control of the pope's security in urban Rio told the local press the blame belonged to Federal Highway Police. But the highway police said they were just following specifications laid out by the Federal Police. Neither agency returned calls. Meanwhile, the Rio mayor's office said it knew nothing about the plan for the pope's travel from the airport to the city center while even the secretary general for President Dilma Rousseff said he didn't know who was to blame but that he was "relieved" no harm came to Francis.

It wasn't the best means to project confidence on security arrangements for a nation that saw widespread anti-government protests paralyze scores of cities last month and that's preparing to host the 2014 World Cup and 2016 Olympics.

Authorities in Brazil earlier said about 10,000 police officers and more than 14,000 soldiers would take part in the overall papal security plan, but on Monday virtually no uniformed officers were seen along the route as Francis was mobbed by the crowds.

There were few barricades set up along the route and thousands of faithful easily made their way onto streets that were meant to be shut off from the public. In some places along the route, people could be seen forming "human chains" to keep the crowds at bay.

About three dozen plain-clothes officers including the pope's personal bodyguards and some Brazilian officers were seen surrounding the pope's vehicles, trying desperately to push the crowds back

Paulo Storani, a Rio-based security consultant who spent nearly 30 years on the city's police force and was a captain in an elite unit sent in to clear out slums, said the fiasco seen Monday had to be analyzed in two ways.

"From the point of view of a head of state, and the pope is a head of state, it's unacceptable what happened. The proximity people had with him was a huge risk, even for his image," Storani said. "On the other hand, in the case of a head of a church and having a charismatic figure like this pope, the situation is different because he wants to be close to the people.

"The police intelligence units have to do a lot more work to detect potential threats to the pope's security and there needs to be a bigger presence of plainclothes officers in the middle of the masses to ensure his security," he added.

There was no word on whether Francis would agree to a heavier security presence when he travels to the city of Aparecida on Wednesday, or holds a Thursday meeting with Catholic youth on Copacabana beach that is expected to draw a crowd of 1 million.

But many changes seemed unlikely.

Francis made clear even before he was pope that the Catholic Church must stop being so closed and self-referential and go out to the edges of the world to interact with the most marginalized. Many cardinals point to a speech Francis made as Cardinal Jorge Mario Bergoglio, days before he was elected pope, as the mission statement that essentially got him elected.

In that pre-conclave speech, Bergoglio said the church must "move toward the peripheries, not only geographic but also existential: those of sin, suffering, injustice, ignorance and religious abstention, thought and all misery."

"When the church does not emerge from itself to evangelize, it becomes self-referential and therefore becomes sick. ... The evils that, over time, occur in ecclesiastical institutions have their root in (being self-referential), a kind of theological narcissism," Bergoglio said then.

After becoming pope, he followed those words up with actions even before his Rio trip. His first parish visit in Rome was to a church in a poor neighborhood on the farthest outskirts of the capital. His first trip outside Rome was to the most peripheral part of Italy, Lampedusa, a speck of an island closer to Africa than the Italian mainland, where he mourned the deaths of refugees trying to reach Europe.

Francis is visiting his home continent for the first time since becoming pontiff, with his visit coinciding with the church's World Youth Day, an event held every three years to bring young Catholics together in an effort to inject new energy in the church.

He will celebrate two Masses expected to each draw more than 1 million people: one on Copacabana beach and the other in a rural pasture. He'll also visit a slum in Rio in an area known by locals as the Gaza Strip because of its heavy violence before police "pacified" it in January, pushing out powerful drug gangs and setting up a permanent outpost.