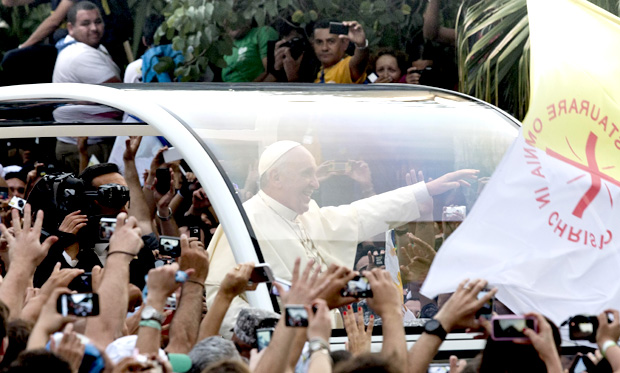 RIO DE JANEIRO Frenzied crowds of Roman Catholics mobbed the car carrying Pope Francis on Monday when he returned to his home continent for the first time as pontiff, embarking on a seven-day visit meant to fan the fervor of the faithful around the globe.

During the pope's first minutes in Brazil, ecstatic believers forced the closed Fiat to stop several times as they swarmed around during the drive from the airport to an official opening ceremony in Rio's center. A few security guards struggled mightily to push the crowd back in scenes that at times looked alarming.

Anti-government protesters clashed with police outside a welcoming ceremony for Francis, but the anger was directed at Brazilian leaders and not the pontiff. A Vatican official also said that authorities had found a small, homemade bomb near a church the pope plans to visit Wednesday but that it didn't appear connected to the pontiff's visit.

Francis looked calm as he made his way through the crowds Monday. He rolled down the window on the back passenger-side of the car where he was sitting, waving to the crowd and touching those who reached inside. At one point, a woman handed the pontiff a dark-haired baby, whom he kissed before handing it back.

After finally making it past crowds and blocked traffic, Francis switched to an open-air popemobile as he toured around the main streets in downtown Rio through mobs of people who screamed wildly as he waved and smiled. Many in the crowd looked stunned, with some standing still and others sobbing loudly.

Idaclea Rangel, a 73-year-old Catholic, was pressed up against a wall and choking out words through her tears. "I can't travel to Rome, but he came here to make my country better ... and to deepen our faith," she said.

At the airport earlier, Brazilian President Dilma Rousseff vigorously shook Francis' hand after he descended the stairs following a no-frills commercial flight that arrived about 4 p.m. local time. He made no public statements. The pope was handed two bouquets of white and yellow flowers by two adolescent girls, each of whom he kissed on the cheek.

Reaching the end of the red carpet full of church leaders and other dignitaries, Francis and the Brazilian president paused to be serenaded by a choir of about three dozen young people singing an anthem linked to World Youth Day, a semi-annual event uniting hundreds of thousands of young faithful from around the globe. Before singing, the kids robustly yelled soccer-like chants in the pope's honor.

Outside the Guanabara government palace in Rio where the pope was being officially welcomed, Alicia Velazquez, a 55-year-old arts teacher from Buenos Aires, waited to catch a glimpse of the man she knew well when he was archbishop of her hometown.

"It was so amazing when he was selected, we just couldn't believe it, we cried and hugged one another," Velazquez said. "I personally want to see if he's still the same man as simple and humble whom we all knew. I have faith that he's remained the same."

It was the first time the Argentine-born Francis returned to his home continent since his selection as pope in March.

During his stay, the 76-year-old pope will meet with legions of young Catholics converging for the church's World Youth Festival in Rio. More than 1 million people are expected to pack the white sands of Copacabana for the Mass celebrated by Francis. He will also visit a tiny chapel in a trash-strewn slum and make a side trip to venerate Brazil's patron saint, Our Lady of Aparecida.

Earlier on the flight from Rome, Francis expressed concern for a generation of youth growing up jobless as the world economy sputters. He warned about youth unemployment in some countries in the double digits, telling journalists there is a "risk of having a generation that hasn't worked."

"Young people at this moment are in crisis," he said.

He didn't specify any country or region, but much of Europe is seeing those gloomy youth joblessness numbers, especially in Greece, Spain and Italy. Brazil is in far better shape than European nations, with unemployment at an all-time low after a decade of economic expansion.

"I'm here for faith! I'm here for joy! And I'm here for the first Latino pope!" Ismael Diaz, a 27-year-old pilgrim wrapped in the flag of his native Paraguay, said as he bounded down the stone sidewalks of Copacabana hours ahead of Francis' arrival.

Diaz gave high fives to four fellow pilgrims, then turned toward local beachgoers who looked back at him while calmly sipping green coconut water and staring from behind dark sunglasses.

"I'm here because I have the force of God in me and want to make disciples of all. Arghhhhhhhhhh!" he yelled, lifting his head and howling into Rio's hot, humid air before flexing his arms and striking a bodybuilder's pose.

Alex Augusto, a 22-year-old seminarian dressed in the bright green official T-shirt for pilgrims, said Monday that he and five friends made the journey from Brazil's Sao Paulo state to "show that contrary to popular belief, the church isn't only made up of older people, it's full of young people. We want to show the real image of the church."

It would be easy for Francis if all Catholics shared the fervor of some of its younger members. But Diaz, Augusto and their fellow pilgrims are the exception in Brazil and much of Latin America, a region with more faithful than any other in the world but where millions have left the church for rival Pentecostal evangelical churches or secularism.

A poll from the respected Datafolha group published Sunday in the newspaper Folha de S.Paulo said 57 percent of Brazilians age 16 and older call themselves Catholic, the lowest ever recorded. Six years ago, when Pope Benedict XVI visited, a poll by the same firm found 64 percent considered themselves among the faithful. In 1980, when Pope John Paul II became the first pontiff to visit Brazil, 89 percent listed themselves as Catholics, according to that year's census.

Pentecostal evangelicals stood at 19 percent of the population in the latest poll, rising from virtually nothing three decades ago by aggressively proselytizing in Brazil's slums.

There is also a huge gap in the level of participation in the different churches, a fervor factor that deeply troubles the Catholic Church. The Datafolha poll said 63 percent of Pentecostal evangelicals report going to church at least once a week, while only 28 percent of Catholics say they attend Mass weekly.

Datafolha interviewed 3,758 people across Brazil on June 6-7 and said the poll had a margin error of 2 percentage points.

Playing out alongside the papal visit is political unrest in Brazil, where widespread anti-government protests that began last month have continued.

With the exception of gay rights groups and others angered by the church's doctrine against abortion and same-sex marriages, the target of most protesters won't be Francis but the government and political corruption

When Francis talks with Rousseff, they are likely to focus on the poor. Upon taking office, the Brazilian leader declared that eradicating extreme poverty was her top goal as president, and she has expanded a network of social welfare programs that have helped lift almost 30 million Brazilians out of poverty in the last decade.

"God chose wisely when he decided to send this humble man to lead the church," said Maria Nascimento, a 60-year-old Catholic living in the Varginha slum that Francis will visit this week.

"There's going to be a huge impact on Brazil after he has come and left, after his feet have walked these streets in our slum, she said. "He's going to help the church in Brazil, the love here for him is growing so fast."