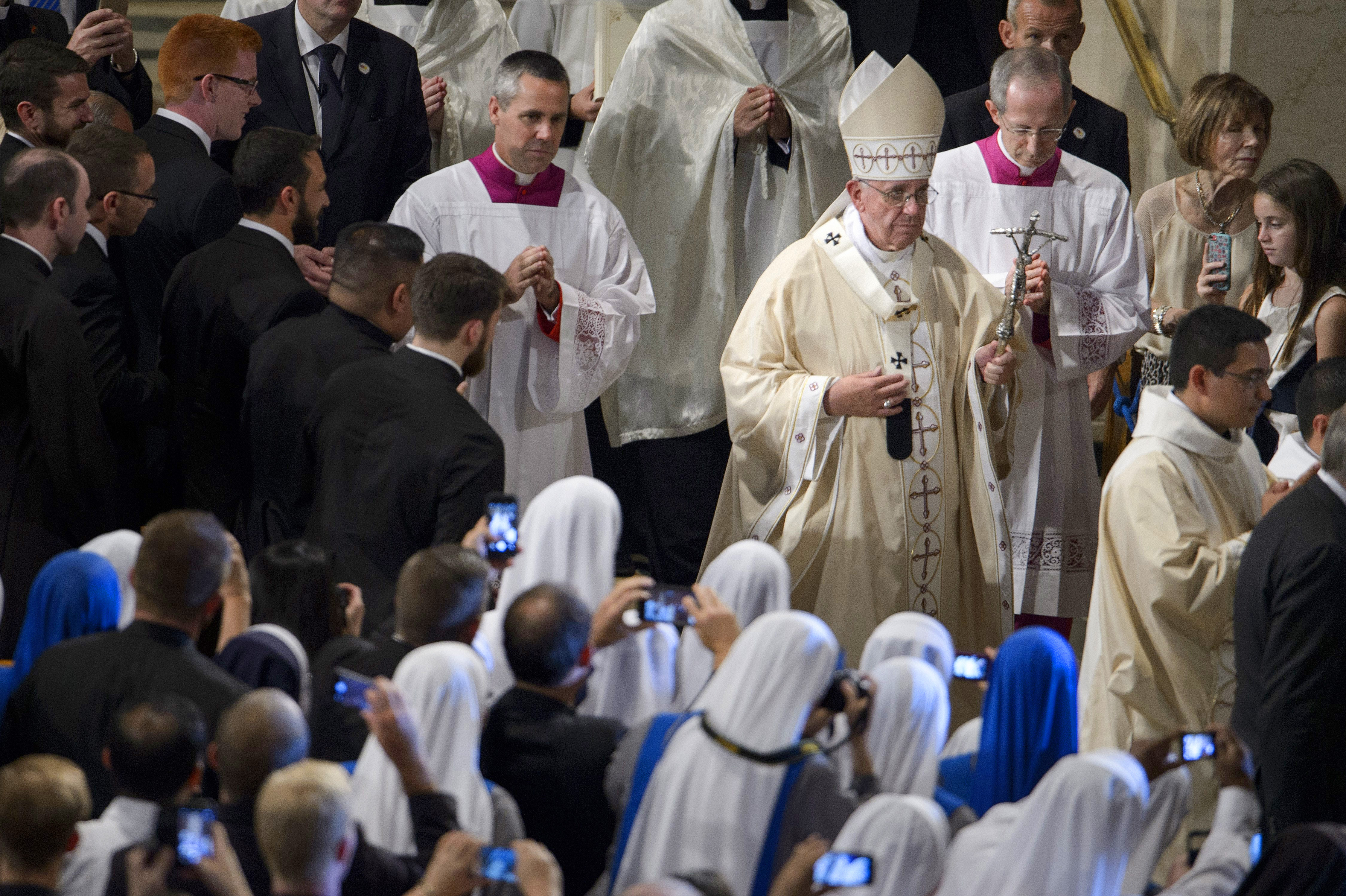 WASHINGTON --Pope Francis on Wednesday is speaking directly to the Spanish-speaking Catholics of America, delivering mass in his native tongue at the Basilica of the National Shrine of the Immaculate Conception in Washington, D.C.

CBS News' Chip Reid reports that Pope Francis couldn't resist the opportunity -- of another joyous, open-air ride in the popemobile -- as an adoring crowd of 25,000 welcomed him to Washington's Basilica.

As he walked through, the faithful filled the aisles straining to see, or even touch him, before he made his way to a small chapel, where he prayed in private. Then on the steps of the largest Catholic Church in North America, at an elaborate temporary outdoor altar, the pope celebrated mass in Spanish -- his native language.

Chip Reid reports that unlike earlier speeches he avoided controversial issues like immigration and religious freedom -- and focused on what it means to be a Catholic. "Go out to tell the good news fearlessly," the pope said. "Without prejudice, without superiority, without condescension, to all those who have lost the joy of living."

At the Basilica, Francis also canonized Junipero Serra, the 18th Century Spanish missionary known to all Californians as the Franciscan who spread Catholicism throughout the state.

The pope's words and actions on Thursday spoke to the important and growing role Hispanics have in the Roman Catholic Church in America -- Hispanics make up 34 percent of Catholics in the U.S. Pope Francis himself is from Argentina, making him the first Latino pope.

Several onlookers at the Basilica on Wednesday hailed the pope as a religious leader for a new generation -- Hispanic and otherwise -- inspired by his message of tolerance and focus on poverty.

"We love his message. He's a breath of fresh air to all of us," Andrea Carrasquillo told CBS news. Carrasquillo and five of her family members all traveled to Washington, D.C. from various cities in California to see "Papa."

When asked whether she, her sister, her mother and her aunts would be able to understand the Spanish mass, the ladies responded, "Claro que si!"

Still, these Spanish-speaking Californians seemed ambivalent at best about the canonization of Junipero Serra.

"There's some controversy still, we're not afraid to admit it," said Carrasquillo's sister, Anissa Dizon, who lives in San Juan Bautista, California. "We come from a mission city, and we're also Native Americans, so we take into account all of that. But we're here for Papa."

As discussed on "CBS This Morning," many Native Americans have protested his canonization, pointing out that Serra marched across California with Spanish conquistadors, helping to wipe out native populations.

"Canonization does not proclaim someone perfect without blemish, without sins... I think we should be careful in terms of the judgments that we're passing on him," Father Thomas Rosica, a deputy Vatican spokesman, told "CBS This Morning" on Wednesday. "There were difficulties, there were challenges, but he did immense good in bringing the gospel to these shores."

For the approximately 25,000 people gathered outside of the Basilica of the National Shrine of the Immaculate Conception in Washington, D.C., the mass was truly about witnessing "Papa."

"It's such an honor to have him come to see us," Joan Maguire of Warrenton, Virginia told CBS. "He's so good with young people," she added, noting that her adult son has praised Pope Francis for his message against income inequality.