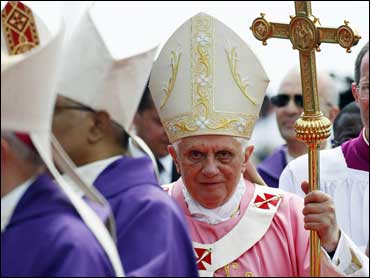 Pope Benedict XVI celebrated Mass for the largest gathering of his African pilgrimage Sunday, telling a crowd on the outskirts of this seaside capital that reconciliation on the war-ravaged continent would come only with a "change of heart, a new way of thinking."

The Vatican said as many as 1 million people turned out on the dusty field near a cement factory to hear the pope at the last major event of his seven-day trip, which began Tuesday in Cameroon.

Speaking from a tented pink altar, the pope said evils in Africa had "reduced the poor to slavery and deprived future generations of the resources needed to create a more solid and just society."

"How true it is that war can destroy everything of value," said Benedict, wearing a pink cape and mopping his sweaty brow with a white handkerchief kept inside his sleeve.

Later he was scheduled to meet with representatives of women's rights groups to praise the role of women in African society.

Angolans have been enslaved, subjugated and at war almost nonstop since Portuguese colonizers brought the first Catholic missionaries in 1491. Many of the slaves taken to Brazil, for example, came from Angola.

The Catholic Church was an ally of the colonizers who discriminated against the people until independence from Portugal in 1975, when civil war erupted, in part fueled by the country's oil and diamond wealth.

Some 15,000 died, including missionaries, before the war ended in 2002, and the scars still are evident among the many people who lost limbs in one of the most heavily mined countries in the world.

A Marxist revolution also has left scars, though the country's president for 30 years, Eduardo dos Santos, abandoned communism and improved relations with the church starting in the late 1980s.

Critics say last year's massive election victory was marred by fraud and corruption and that the pope must beware of allowing his visit, sponsored by the state, to be seen as legitimizing an authoritarian regime. The bishops in Angola twice have denounced the government for leaving its people mired in poverty while leaders enrich themselves off oil and diamonds.

Since he arrived on Friday from Cameroon, the pope has met with dos Santos and spoken out against corruption in Africa, the continent with the fastest-growing Catholic population in the world.

Before he said Mass on Sunday, Benedict clasped his hands, as if in prayer, and offered his condolences to the families of two 20-year-old women trampled to death in a stampede at a Luanda stadium before a youth event he addressed on Saturday. 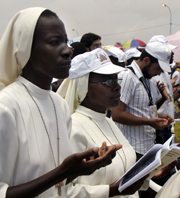 He also wished a speedy recovery to some 40 people injured in the crush. Dozens of others collapsed and were treated at the site for heat exhaustion.

Later, the Vatican's No. 2 official, Cardinal Tarcisio Bertone, blessed the bodies of the two victims, laid out under white sheets at Josina Machel Hospital. Accompanied by Angola's Foreign Minister Assuncao Does Anjos, the cardinal visited with injured victims.

State radio appealed to people to take water and food to Sunday's Mass. People also carried parasols and stools amid the hooting cars and motorbikes making their way to see the pope. Some men hoisted children onto their shoulders and mothers strapped babies to their backs.

Even before he landed in Africa, the pope provoked protests after he told reporters on his chartered Alitalia jet that condoms were not the answer to Africa's severe AIDS epidemic, suggesting that sexual behavior was the issue.

He condemned sexual violence against women, but also chided the 45 African countries including Angola that have approved abortion in cases of rape or incest or when a mother's life is in danger.
By Associated Press Writer Victor L. Simpson; AP's Michelle Faul and Casimiro Siona contributed to this report from Luanda