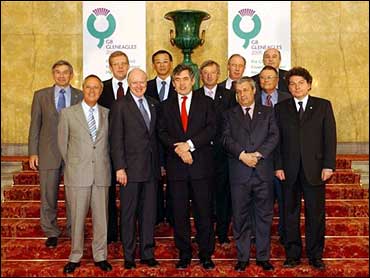 Finance ministers from the Group of Eight industrialized nations agreed Saturday to a historic deal canceling at least $40 billion worth of debt owed by the world's poorest nations.

Britain Treasury chief Gordon Brown said 18 countries, many in sub-Saharan Africa, will benefit immediately from the deal to scrap 100 percent of the debt they owe to the World Bank, the International Monetary Fund and the African Development Bank.

As many as 20 other countries could be eligible if they meet strict targets for good governance and tackling corruption, leading to a total debt relief package of more than $55 billion.

Aid agencies welcomed the deal, saying it would save the 18 countries a total of $1.5 billion a year in debt repayments that could now be used for health care, education and infrastructure development.

Finance ministers from the United States, Britain, Japan, Canada, Russia, Germany, Italy and France agreed to the package during a two-day summit in London.

"A real milestone has been reached," U.S. Treasury Secretary John Snow said. "President Bush's commitment to lift the crushing debt burden on the world's poorest countries has been achieved. This is an achievement of historic proportions."

Nations in sub-Saharan Africa alone owe some $68 billion to international bodies. Rich nations had long agreed the debt must be relieved, but the international community could not agree on a formula for tackling the problem.

The package agreed to Saturday was put forward by the United States and Britain following talks in Washington last week between Bush and British Prime Minister Tony Blair.

Britain originally wanted rich countries to assume the repayments for the poor countries but eventually agreed with the U.S. position that the debts be scrapped outright.

Bush also made a significant concession, agreeing that rich nations would provide extra money to the multilateral bodies to compensate for those assets being written off and would ensure that future aid packages would not be affected.

Another nine countries are close to completing the targets for good governance set out under the initiative and would then qualify.

A total of 38 countries are participating in the HIPC program, launched by the World Bank and IMF in 1996.

"This is a great deal for people in many of the very poorest countries, it reflects well on (Britain's Treasury chief) Gordon Brown and (U.S. Treasury Secretary) John Snow and is a tribute to the growing global campaigns to beat poverty," said Jamie Drummond, executive director of DATA, the organization founded by U2 singer Bono.

"This bold step builds serious momentum for a historic breakthrough on doubling effective aid and trade justice at the G8 summit next month."

The Jubilee Debt Campaign called for further action and said at least 62 countries needed 100 percent of their debts canceled to meet the U.N. Millennium Development Goals of reducing poverty, hunger and disease affecting billions of people by 2015.

Britain has made tackling poverty in Africa and the developing world a priority for its G8 presidency.

Blair's approach is three-pronged: increasing aid; eliminating debt; and removing export subsidies and other trade barriers that make it difficult for developing nations to compete.

Some question whether agreement on that will be reached at the July 6-8 G8 summit in Gleneagles, Scotland.

The United States and Japan both reject a British proposal to raise that money by selling bonds on the world capital markets — the International Finance Initiative.

Like the United States, Japan prefers its own bilateral aid programs, and France is pushing its own initiative — an international aviation tax.