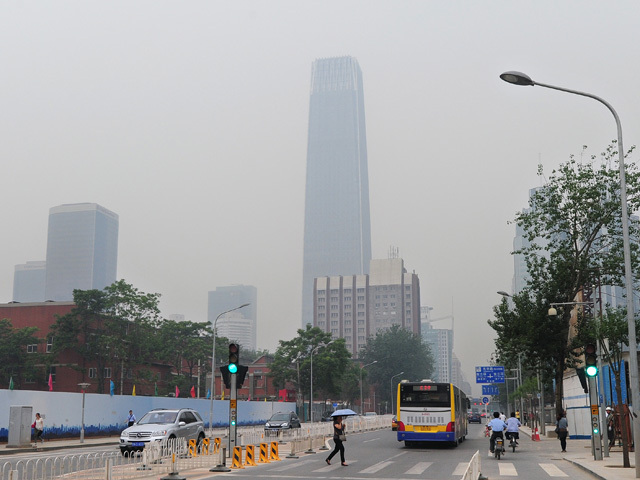 A U.N. conference on climate change ended Sunday without a major deal to cut toxic emissions. No country emits more carbon dioxide than China -- a byproduct of its booming economy. And, as CBS News correspondent John Blackstone reports, those Chinese emissions are having a big impact in the U.S.

Chinese officials insist the murky air over Beijing this month is just fog. But measurements taken at the U.S. embassy there show dangerously high levels of air pollution -- so bad that traffic has been disrupted and flights have been delayed or cancelled.

"It's no longer just their problem; it's our problem," said Kim Prather of the Scripps Institution of Oceanography.

Prather studies atmospheric chemistry. CBS News met her at a scientific conference in San Francisco, where she was presenting research that shows what's in the air over China can affect the weather in America.

The Chinese pollution is carried by the jet stream across the Pacific. In the atmosphere over this country, it can stop the clouds from producing rain and snow.

But while flying over California collecting atmospheric samples, Prather found something else from China that may make up for much of that lost rain. It's dust -- from huge storms in China's vast deserts.

Because of their chemical makeup and larger size, those dust particles do collect enough moisture to make rain and snow.

"We found that wherever there was dust, there was ice," Prather said. "And then below us was snow."

Understanding the factors that influence California's rain and snow is important because what falls in the mountains is the main water source for most of the state's 37 million people.

"We're working with the weather guys to try and see this climate-weather link with pollution," Prather said. "It's a complex problem."

By unraveling those complexities, Prather's research could improve the accuracy of weather forecasting -- explaining why some clouds just blow over while others produce snow storms.