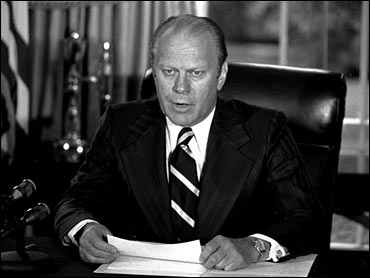 Having endured the Watergate scandal and President Richard Nixon's resignation, the American public welcomed Gerald Ford as he assumed the presidency in August 1974 with an approval rating of 71% -- but that was the highest level it would reach.

Approval of Ford's presidency was short-lived; although personally well-liked by Americans, his job approval rating fell when he pardoned Nixon shortly after he took office and never really recovered. Most Americans felt that his pardon of Nixon was a mistake, and the poor economy and U.S. pullout from Vietnam probably also contributed to his lagging approval ratings.

He lost the 1976 presidential election to Democrat Jimmy Carter, and exit polls show that many voters still held his pardon of Nixon against him. As has been the case with other presidents, however, assessments of Ford's presidency (including the Nixon pardon) became more positive in the years after he left office.

However, by the time he left office after losing the 1976 general election, his approval rating had risen to 53% -- higher than it had been since the Nixon pardon.

APPROVE OF FORD'S JOB AS PRESIDENT
(From Gallup Polls)

The public was not overly supportive of the job Ford did handling either the worsening economy or the last days of the war in Vietnam. A CBS News/New York Times Poll conducted in June 1976 found 46% approved of the way Ford was handling the economy, and 39% approved of how he was dealing with foreign policy. In October, just before the election, 46% of voters approved of his handling of each.

Americans liked Gerald Ford as a person. In May 1976, 48% held a favorable impression of him, and 39% were unfavorable.

In an April 1976 CBS News/New York Times Poll, 65% said they he struck them as being more honest and having more integrity than most.

50% felt President Ford had strong qualities of leadership, and 63% thought he was a very competent person.

In Time magazine polls, most disagreed that Ford was a weak president, that he had no program for the country, had been in Washington too long, or wasn't smart enough.

Despite President Ford's positive image, Americans responded better to his opponent, Democratic presidential nominee Jimmy Carter. In a poll conducted just before the 1976 election, when asked which candidate they felt more comfortable with as a person, 46% chose Jimmy Carter and 35% opted for President Ford.

And although more voters felt they knew the kind of president Ford would be (42%) than felt the same about Carter (29%), by more than two to one, Jimmy Carter, not Gerald Ford, was the candidate voters felt "really cared about people like me."

The act for which Ford is most well-known caused problems for him among all Americans and later among voters in the 1976 presidential election. In September 1974, just after Ford pardoned Richard Nixon for crimes related to the Watergate break-in, a Time magazine poll showed that 58% of the public thought Ford did the wrong thing in pardoning Nixon, and 71% felt that Ford had not told the country the whole truth about the matter.

Polls in subsequent years found similar sentiments; it wasn't until the mid-1980s that the public began to think the pardon might have been the right thing to do.

After facing a strong challenge from Republican candidate Ronald Reagan during the primaries, President Ford lost the 1976 general election to Jimmy Carter, 48% to 50%. CBS News exit polls from the 1976 election suggest that voters continued to disapprove of his pardon of Richard Nixon. When asked to choose from a list whether there was anything they disliked about Gerald Ford, 32% of voters mentioned that act -- making it the top mention. Perceptions of Ford's ties to big business didn't help him either; the exit poll showed that 22% of voters said they disliked him for that reason.

Polls conducted just before the election also showed that voters were critical of Ford's pardon of Nixon. In an August Time Magazine poll, 68% of voters fully or partially agreed that Gerald Ford "did not act in the best interests of the country when he pardoned Richard Nixon before he had been impeached or tried." An October Time magazine poll found 53% of voters agreed that Ford made a mistake when he pardoned Nixon.

Just after the election, views of Ford were mediocre. According to a December 1976 Gallup poll, 50% of Americans volunteered that Ford would go down in history as an average president. And a post-election Roper Poll found that even among those who said they voted for him, 50% felt he was the right choice for president but said they didn't feel any real enthusiasm for their candidate.

President Ford's approval rating has risen over the years since he left office. According to a June 2006 Gallup Poll, 60% said they approved of the job he did as president.

Former President Ford also enjoyed a positive image four years after leaving the Oval Office. In a CBS News/New York Times Poll conducted in March 1980, 55% said they had a favorable impression of Gerald Ford, while 26% had an unfavorable view of him. This was much more positive than views of Jimmy Carter around the same time; in a June 1980 CBS News/New York Times Poll, 33% held a favorable view of Carter, and 58% were unfavorable.

And even President Ford's pardon of Richard Nixon came to be viewed more positively over time. In a 2002 ABC News poll, 59% felt that was the right thing to have done, while 32% thought it was wrong.