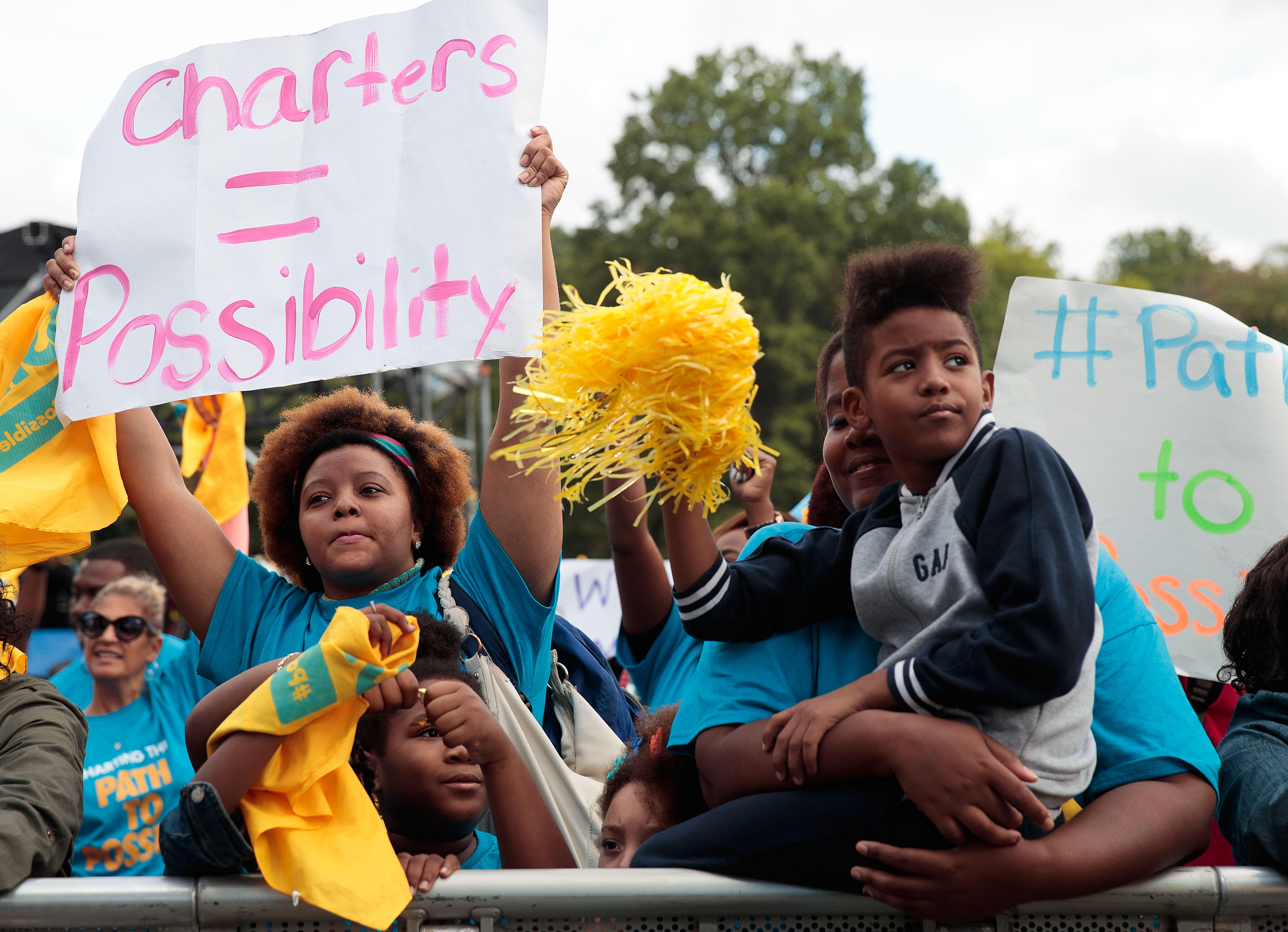 Expanding charter schools around the country is losing support among Americans, even as President Donald Trump and his administration continue to push for school choice, according to a survey released Tuesday.

Trump campaigned on a promise to dramatically improve school choice — charter schools and private school voucher programs — and his Education Secretary Betsy DeVos has made it a priority. But so far the message does not appear to have hit home with the public.

About 39 percent of respondents favor opening more charters — schools that are funded by public money, but usually operated independently of school districts — according to the survey by Education Next, a journal published by Harvard's Kennedy School and Stanford University. That's down from 51 percent last year.

Supporters of charter schools had feared that Trump's polarizing rhetoric could hurt the school-choice movement.

They also emphasize that private school vouchers and voucher-type programs, championed by Trump, have seen stable support and declining opposition. Finally, when respondents were told that Trump was advocating for charter schools, overall support increased by 6 percentage points.

"We can't say definitively what is responsible for the decline," said Martin West, associate professor of education at Harvard University and a co-author of the report. West speculated that the drop may have been caused by continued opposition from teachers unions and many Democrats plus debates over charters' effectiveness.

"These developments may have led to a souring of the charter brand," West said.

Meanwhile, opposition to publicly funded vouchers that help parents pay private school tuition dropped from 44 percent last year to 37 percent; 45 percent of respondents currently favor the idea. When it comes to tax credit-funded scholarships, resistance fell from 29 percent to 24 percent, while support was at 54 percent now.

Proponents of charter schools are not discouraged. Nina Rees, president of the National Alliance for Public Charter Schools, says the drop in popularity was due to "expensive, sustained, and coordinated campaigns to discredit charter schools, led by teachers' unions and special interests that feel threatened by families having a choice in public school."

To others, the Trump effect is more apparent. On the campaign trail, Trump spoke of funding a $20 billion school choice program and has proposed major cuts to long-standing K-12 programs, such as teacher preparation and after-school classes, while requesting more funding for charters and vouchers. DeVos has faced criticism from the left for promoting solely school choice and paying little attention to public schools.

Robin Lake, director of the Center on Reinventing Public Education, a non-partisan research and policy organization, said the Trump administration's rhetoric has only deepened partisan tensions around charter schools.

"I would be shocked if it were unaffected," Lake said. "I am just hearing a lot from folks on the ground that schools have a lot of conversations with parents that they didn't use to have about why charter schools are public and why they are not a partisan issue."

"I am not sure it's not the only reason, but I am pretty sure it's a contributing factor."

Rick Hess, director of education policy at the conservative American Enterprise Institute, said Trump and DeVos may have turned school choice into a much more federal and divisive issue than it needed to be by talking about it in black-and-white terms and by being too critical of public schools.

"Sometimes the way these things get talked about, you can wind up alienating people who might be with you," Hess said.

An April poll conducted by the Associated Press-NORC Center for Public Affairs Research, found greater levels of support for charter schools. Forty-seven percent said they favor opening more public charter schools, 23 percent were opposed, and 30 percent felt neutral about it. Meanwhile, 43 percent of respondents supported giving low-income families tuition vouchers for private schools, 35 percent were opposed and 21 percent didn't have a strong opinion either way. The poll had a sample size of 1,036 and the margin of error was plus or minus 4.0 percentage points.

The Education Next survey was based on interviews with 4,214 adults across the country. The margin of error was 1.5 percentage points.