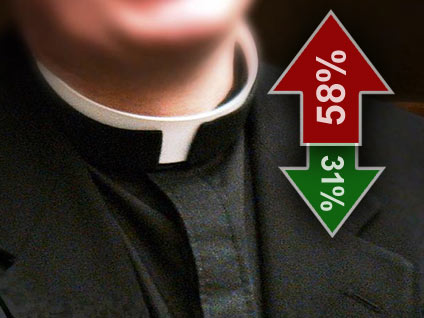 Most Americans, including Catholics, believe the Vatican has done a poor job handing child sexual abuse by priests, according to a new CBS News/New York Times poll. And while there is a perception that the Vatican has shifted away from covering up alleged cases, nearly three in four Americans believe child sexual abuse by priests remains a problem.

A majority of both Americans overall and Catholics say the Vatican's handling of the issue has not had an effect on their perception of the Catholic Church. But among those whose perception has shifted, it has not been in a positive direction.

Thirty-six percent of Americans, including one in five Catholics, say the Vatican's handling of the situation has left them feeling more negatively about the Church than they used to. Just four percent feel more positively.

Catholics have somewhat more positive perceptions: Three in four say the Vatican is now trying to prevent abuse, while 17 percent say it is trying to cover it up.

Catholics' Views and Perceptions of the Pope:

Four in ten Catholics say reports of child sexual abuse have caused them to doubt the Vatican's authority. Fifty-five percent say the reports have not caused such doubts.

More than three in four say a person can be a good Catholic while not accepting the Pope's authority.

Despite their concerns, fewer than one in ten Catholics say the abuse reports have led them to question whether they will remain in the Church. And the vast majority say the reports have not had an effect on their level of comfort with their own priest or their donations to church.

Pope Benedict XVI receives favorable views from America's Catholics, though Americans overall view him negatively. Forty-three percent of Catholics have a favorable view of the pope, up from 27 percent in March. Seventeen percent have an unfavorable view.

Roughly half of Catholics consider Benedict's leadership to be a mixed blessing. Twenty-five percent say his leadership has helped the Church, while 15 percent say it has hurt.

Then-Pope John Paul II fared better on this question when it was asked in April 2002: Then, 46 percent said his leadership had helped the Church, and just five percent said it had been a negative.

More than half of Catholics say the Vatican is out of touch with everyday Catholics. Two-thirds of Catholics would allow priests to marry, and nearly six in ten would allow women to be ordained as priests.

Catholics generally do not believe child sexual abuse is more common in the Catholic Church than in other walks of life. They are divided on whether celibacy and homosexuality are a major factor, minor factor or non-factor in child sexual abuse.

Most Americans believe media reporting on abuse allegations has been fair, but Catholics are split, with nearly half saying the issue has been blown out of proportion.

And while Americans overall are most likely to say the media treat the Catholic Church the same as other religions, 64 percent of Catholics say the press corps has been harder on their church.

This poll was conducted among a random sample of 1079 adults nationwide, interviewed by telephone April 28-May 2, 2010. Phone numbers were dialed from RDD samples of both standard land-lines and cell phones. The error due to sampling for results based on the entire sample could be plus or minus three percentage points. The error for subgroups is higher.

An oversample of Catholics was interviewed, for a total of 412 interviews. The results were then weighted in proportion to the adult population. The margin of error for the sample of Catholics is five points. This poll release conforms to the Standards of Disclosure of the National Council on Public Polls.