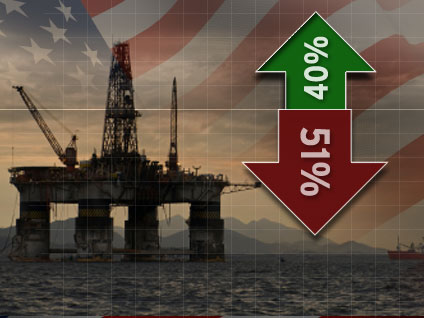 With oil continuing to stream into the Gulf, a majority of Americans - 51 percent -- say the costs and risks of increased offshore drilling are too great, according to a new CBS News poll.

That's ten points higher than one month ago and an increase of 23 points from a poll taken in August 2008, when Republican rallies regularly broke out in chants of "drill, baby, drill."

In the new poll, 40 percent said they favor increased offshore drilling. That's a drop of five points from last week and 22 points from August 2008.

Most Americans believe that BP will ultimately be successful in stopping the flow of oil - 56 percent say yes, while 29 percent say no. They do not, however, expect it to happen anytime soon.

Among those who expect BP to stop the oil flow, just 32 percent expect it to happen in the next few weeks. Roughly half say it will be in the next few months, while 14 percent way it will take longer than that.

Americans increasingly see the oil spill not as an isolated incident but rather part of a broader problem with offshore drilling. Last month, 51 percent saw the spill as an isolated incident. That figure has now dropped to 45 percent. The percentage that see the spill as part of a broader problem, meanwhile, has increased ten percent to match that 45 percent figure.

Most Republicans see the spill as an isolated incident, while most Democrats see it as part of an overall problem.

Americans are paying attention to the spill: Two in three say they have heard or red "a lot" about the incident, up from 56 percent last month.

As Hotsheet reported this morning, the poll also found that 63 percent of Americans believe the Obama administration should be doing more to clean up the spill. Just 28 percent say it is doing all it can.

Thirty-eight percent approve of the Obama administration's handling of the spill, up slightly from last week. Forty-four percent disapprove. BP's approval rating on handling the spill has also improved slightly, but it stands at just 21 percent.

More Coverage of the Spill:

This poll was conducted among a random sample of 960 adults nationwide, interviewed by telephone June 1-3, 2010. Phone numbers were dialed from random digit dial samples of both standard land-line and cell phones. The error due to sampling for results based on the entire sample could be plus or minus three percentage points. The error for subgroups is higher.