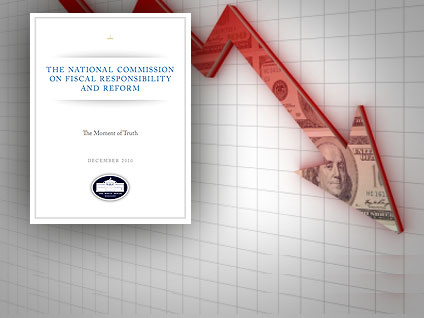 President Obama's bipartisan deficit commission failed to garner the 14 votes needed to officially send its deficit reduction plan to Congress, but the commission leaders expressed optimism about the viability of some of the plan's proposals.

Eleven of the commission's 18 members, including both Democrats and Republicans, voted to endorse the comprehensive but controversial plan. The proposals put forward, which include a mix of tax increases and spending cuts, would theoretically cut $4 trillion from the federal budget over the next decade.

Stern voted against the plan because he said it did not recommend enough investments for the future. Yet he said the plan, written by the commission co-chairs former Clinton White House chief of staff Erskine Bowles and former Republican Senator Alan Simpson of Wyoming, still deserved a vote in Congress.

Mr. Obama today praised the work of the deficit commission for "highlighting the magnitude of the challenge before us, and outlining an array of options to confront it."

He said that he and his economic team will study the proposals in the coming weeks as they develop their budget priorities for the coming year.

Simpson expressed confidence that at least some of the ideas would receive consideration. "We took a big banana and threw it into the gorilla cage," he said. "The gorilla has picked it up. They peel it, mash it, play with it, but they will eat some. Many pieces of this will be digested and nourish this country."

Still, some members of the deficit commission said Congress -- particularly Republicans -- cannot be serious about reducing the deficit while endorsing an extension of the Bush tax cuts for the wealthiest Americans. Congress intends to extend at least some of the tax cuts before the year is up. Making all of the tax cuts permanent would cost $3.7 trillion over a decade, according to the Treasury Department -- coincidentally on par with how much the deficit commission is trying to cut from the budget.

Democratic Rep. John Spratt of South Carolina, chairman of the House Budget Committee, said "one can't help notice the irony" of voting to extend the tax cuts one day, and then proposing a report to reduce the deficit on the next day. Ultimately, however, Spratt said he would vote for the plan because it was "far from final."

Democratic Sen. Dick Durbin of Illinois concurred that it was irresponsible for Republicans to call for an extension of all the tax cuts. Democrats, by comparison, have suggested extending them for everyone except for those making over $200,000 or families making more than $250,000. The difference between the Democratic and Republican plans is $700 billion. A new CBS News poll shows that most Americans agree with the Democratic plan.

"It's $700 billion added to the deficit to give tax cuts to the wealthiest Americans," Durbin said. "If we're serious about the budget deficit on both sides, we should acknowledge that reality."

Durbin said that, in spite of his reservations about the deficit reduction plan, he was voting in favor it because "politicians on the left and right have to acknowledge the deficit crisis this nation faces."

However, he added that if the plan were to go before Congress, he would vote against it. "I fear this proposal as written takes too much away from proposals that support the neediest," he said.

The report includes proposals for dramatic reductions in income tax rates (but also the elimination of several tax deductions), a doubling of the gas tax, cuts to Medicare, raising the retirement age and other changes to Social Security, cuts to agricultural subsidies, the elimination of a major part of the Democrats' health care overhaul, and a number of other dramatic ideas.

Democratic Rep. Xavier Becerra of California said he was voting against the plan because it required too much sacrifice from middle and lower income Americans while lowering all the income tax brackets. He said it was unjustifiable for Republicans to endorse lower taxes after enacting costly proposals over the past decade, such as the wars in Iraq and Afghanistan and President Bush's Medicare Part D plan, without paying for them.

Congress shouldn't lower taxes for wealthy Americans because "we need to pay for all the things you wanted to do, like go to Iraq, a prescription drug plan, go to Afghanistan," he said.

Tough Choices: Cutting Medicare's Rising Costs$14 Trillion in Debt - Why You Should Care