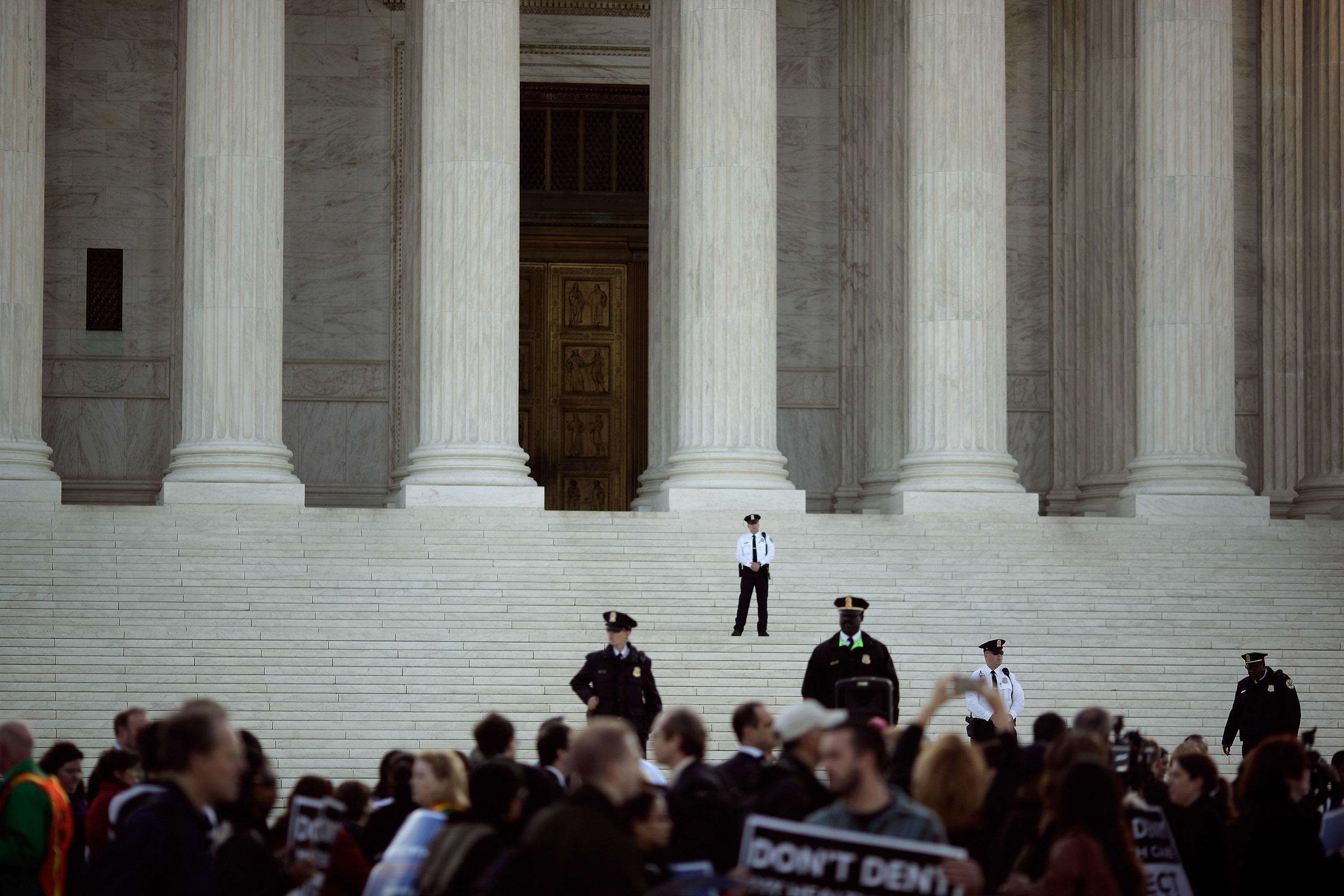 As the Supreme Court begins to hear arguments about the 2010 health care overhaul, just one in four say the high court should keep President Obama's signature legislative achievement intact, according to a new CBS News/ New York Times poll.

Thirty-eight percent say the entire law should be abolished, according the poll, conducted March 21-25. Another 29 percent would like the high court to strike down only the requirement that nearly all Americans obtain health insurance if they do not have it.

The court on Tuesday will hear arguments on whether the so-called individual mandate - which will require nearly all Americans to acquire insurance or pay a penalty -- is unconstitutional. The case tackles not only a hotly-debated legal matter, but also the most controversial aspect of Mr. Obama's health care law.

When asked directly about the mandate, which goes into effect in 2014, 51 percent of Americans said they disapprove of it, while 45 percent said they approve. Most Republicans and independents oppose the mandate, while Democrats support it.

When the Supreme Court issues a ruling this summer, it could choose to uphold the law, strike down just the individual mandate, strike the mandate along with certain other provisions or strike down the entire law.

Views on the law and what Americans would like to see the Supreme Court do about it break down along party lines. Most Republicans, 65 percent, disapprove of the law and would like to see all of it overturned. Democrats support the law, and 39 percent want the Supreme Court to keep it in place, but 35 percent want to see the health insurance mandate outlawed. Nearly half of independents disapprove of the health care law, and 36 percent would like the whole law overturned.

At the same time, large percentages of Americans - even majorities of Republicans -- support specific elements of the health care law. For instance, a full 85 percent of Americans support the requirement for insurance companies to cover those with pre-existing conditions.

Most health policy experts say that the individual mandate in order for insurers to able to accommodate these customers. As the Obama administration has argued to the court, without an individual mandate, the provision barring insurers from discriminating against those with pre-existing conditions can "create a spiral of higher costs and reduced coverage because individuals can wait to enroll until they are sick." Should the Supreme Court decide to strike down the individual mandate, the administration has asked the court to strike down the pre-existing conditions provision as well.

Other popular provisions include the reduction of the Medicare "donut hole" for prescription drug coverage (77 percent approve) and the provision allowing children up to 26 years old to stay on their parents' health care plans (68 percent approve).

Among those with children age 18 to 26 who have health insurance, 31 percent say they have already benefitted from the provision that allows them to add their children to their own coverage. Seventy percent of parents of children 18 to 26 approve of this change.

Two-thirds of seniors approve of the provision that offers assistance with the prescription drug donut hole, and 15 percent have already benefitted.

But even among those who have benefitted from at least one of these three provisions (36 percent), there are mixed views of the health care law overall. Forty-eight percent approve of it -- including just 21 percent who strongly approve -- and 35 percent disapprove. Another 7 percent don't have an opinion.

There are concerns about the impact on the economy as well. Three in four think it is likely that businesses will have to cut jobs as a result of the health care law.

The personal impact of the law is also a concern; few Americans are convinced that it will benefit them personally. Only 19 percent think the law will mostly help them; most either think it will hurt them (31 percent) or not have much of an effect (43 percent).

Half of Republicans think it will hurt them, while most Democrats believe it will have no effect on them personally.

One third expect the quality of the care they receive to also get worse. Just 17 percent expect that will improve as a result of the 2010 law.

Most Americans are at least somewhat concerned that their access to tests and treatment will be limited, and that they may be required to change doctors.

Two years after the health care bill was signed into law, nearly half of Americans (48 percent) still say the effect it will have on themselves and their family is confusing to them. Another 47 percent now say they have a good understanding of the law - up just six points since it was passed.

While much of the focus may be on the issue of health care this week, the economy is the public's top issue when it comes to the presidential election. Forty-eight percent of Americans pick the economy as the most important issue, more than twice as many as choose health care (22 percent).

This poll was conducted by telephone from March 21-25, 2012 among 986 adults nationwide. Phone numbers were dialed from samples of both standard land-line and cell phones. The error due to sampling for results based on the entire sample could be plus or minus three percentage points. The error for subgroups may be higher. This poll release conforms to the Standards of Disclosure of the National Council on Public Polls.
View CBS News In