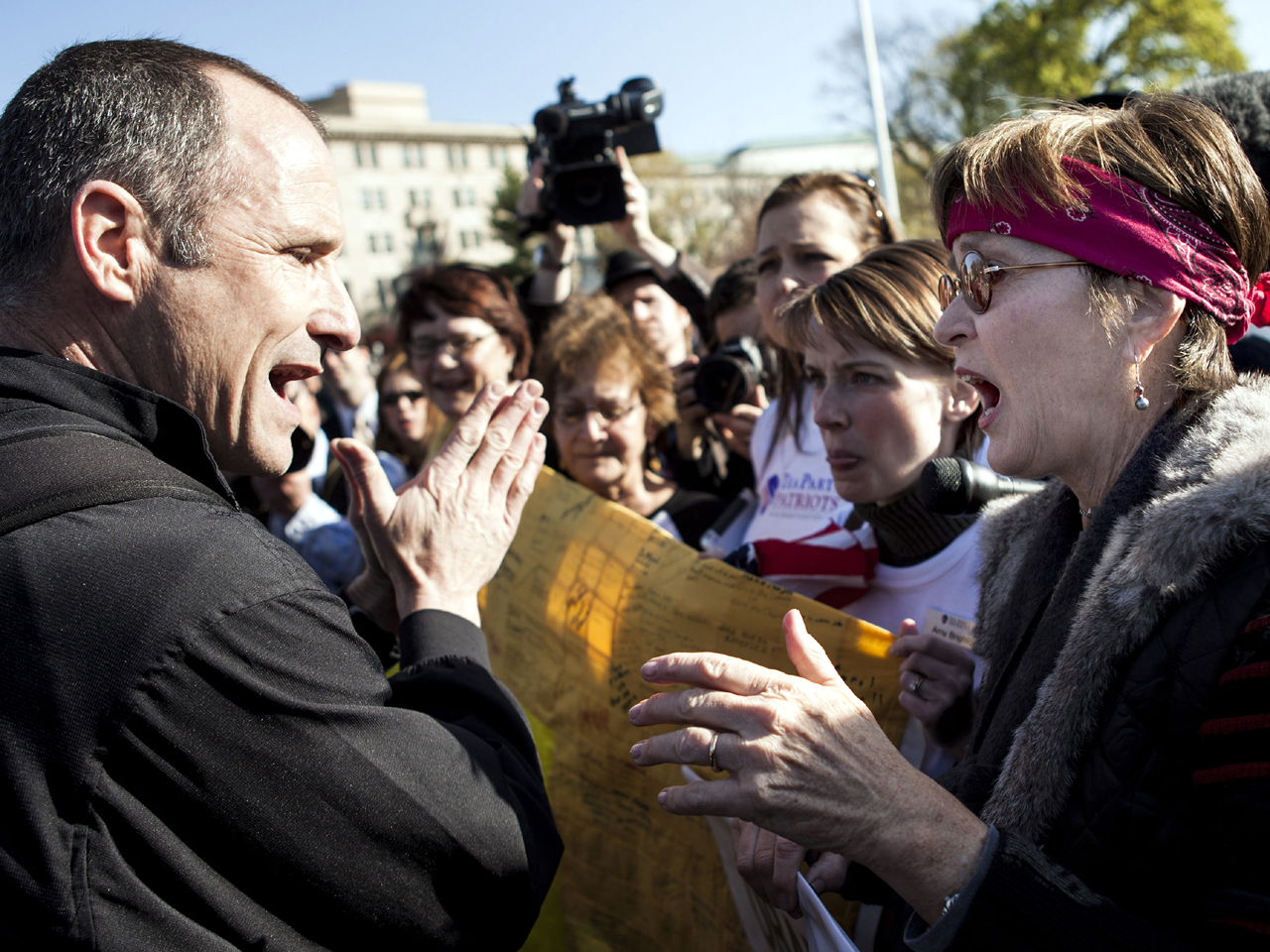 (CBS/AP) WASHINGTON - The Supreme Court plunged into debate Monday on the fate of the Obama administration's overhaul of the nation's health care system, and the justices gave every indication they will not allow an obscure tax law to derail the case.

A decision is expected by late June, in the midst of a presidential election campaign in which all of President Obama's Republican challengers oppose the law and promise its repeal if the high court hasn't struck it down in the meantime.

With demonstrators chanting outside, eight of the nine justices eagerly jumped into questioning of lawyers about whether the case has been brought prematurely because a 19th century law bars tax disputes from being heard in the courts before the taxes have been paid.

"Only Justice Clarence Thomas was silent," CBS News legal analyst Andrew Cohen said. "He hasn't asked a question in six years, and no one expected him to start today."

The prematurity issue is significant because the key part of the law -- the requirement that all Americans buy health insurance or pay a penalty on their taxes -- doesn't take effect until 2014, CBS News correspondent Jan Crawford reports.

Under the new health care law, taxpayers who don't purchase health insurance would have to report that omission on tax returns for 2014 and would pay a penalty along with federal income tax on returns due by April 2015. Among the issues is whether that penalty is a tax.

The federal appeals court in Richmond, Va., ruled the lawsuits should wait until that actually happens. But even if the Supreme Court agrees, which it seemed unlikely to on Monday, the justices this week will go ahead and hear all the other arguments against the law.

Solicitor General Donald Verrilli Jr., defending the health law, urged the court to decide what he called "the issues of great moment" at the heart of the case.

The 26 states and a small business group challenging the law also want the court to go ahead and decide on its constitutionality now.

The law has sharply divided the nation. A CBS News/New York Times poll released Monday shows 47 percent of Americans disapprove of the president's Affordable Care Act, including 30 percent who strongly disapprove. In the poll, conducted March 21-25, only 36 percent of those questioned said they support the law either somewhat or strongly.

In court Monday, the justices fired two dozen questions in less than a half hour at Washington attorney Robert Long, who was defending the appeals court ruling.

"What is the parade of horribles?" asked Justice Sonia Sotomayor, if the court decides that penalties are not a tax and the health care case goes forward? Long suggested it could encourage more challenges to the long-standing system in which the general rule is that taxpayers must pay a disputed tax before they can go to court.

The questions came so quickly at times that the justices interrupted each other. At one point, Justices Ruth Bader Ginsburg, Elena Kagan and Sotomayor started speaking at the same time. Chief Justice John Roberts, acting as traffic cop, signaled Ginsburg to go first, perhaps in a nod to her seniority.

Outside the court building, about 100 supporters of the law walked in a circle holding signs that read, "Protect my healthcare," and chanting, "Care for you, care for me, care for every family." A half-dozen opponents shouted, "We love the Constitution!"

Republican presidential candidate Rick Santorum was there, too, declaring anew that GOP front-runner Mitt Romney has no standing to challenge Mr. Obama on the law since Massachusetts passed a somewhat similar version when Romney was governor. Santorum said, "If you really want Obamacare repealed there's only one person who can make that happen."

A four-person student band from Howard University was part of the group favoring the law, playing New Orleans-style jazz tunes.

The law, much of which has still to take effect, would require almost all Americans to obtain health insurance and would extend coverage to more than 30 million people who now lack it. The law would be the largest expansion in the nation's social safety net in more than four decades.

People hoping for a glimpse of the action had waited in line all weekend for the relatively few seats open to the public. The justices allotted the case six hours of argument time, the most since the mid-1960s.

Nurses Lauri Lineweaver and Laura Brennaman, who are completing doctoral degrees, had been waiting since noon Sunday and got tickets to see arguments. "It's an honor to be in the court," said Lineweaver, 35.

The court will release audio recordings of the arguments on the same day they take place. The first time that happened was when the court heard argument in the Bush v. Gore case that settled the 2000 presidential election. The last occasion was the argument in the Citizens United case that wound up freeing businesses from longstanding limits on political spending.

Outside groups filed a record 136 briefs on various aspects of the court case.

The first arguments Monday concern whether the challenge is premature under a 19th century tax law because the insurance requirement doesn't kick in until 2014 and people who remain uninsured wouldn't have to pay a penalty until they file their 2014 income taxes in early 2015.

Taking this way out of the case would relieve the justices of rendering a decision in political high season, just months before the presidential election.

Tuesday is the ballgame, Crawford reports. That's when the justices will take up the so-called "individual mandate," the controversial requirement that Americans have to buy insurance. The question: Can Congress force people to buy something?

The opponents argue Congress has no power under the Constitution to order people to buy anything and that if the law stands, Congress will have sweeping new authority to dictate Americans' behavior.

The administration argues Congress has ample authority to do what it did. If its action was rare, it is only because Congress was dealing with a problem that has stymied Democratic and Republican administrations for many decades: How to get adequate health care to as many people as possible, and at a reasonable cost.

On Wednesday, the justices will turn to more technical though equally important questions, Crawford reports, including: If the individual mandate is unconstitutional, does that mean the entire law is struck down?

One lower court rejected the individual mandate but said the rest of the massive law could remain, including provisions that keep insurers from dropping people with pre-existing conditions or raising premiums based on medical history.

Separately, the justices also will take up whether Congress lacked the power to expand the Medicaid program to cover 15 million low-income people who currently earn too much to qualify.

If upheld, the law will force dramatic changes in the way insurance companies do business, including forbidding them from denying coverage due to pre-existing medical conditions and limiting how much they can charge older people.

The law envisions that insurers will be able to accommodate older and sicker people without facing financial ruin because of its most disputed element, the requirement that Americans have insurance or pay a penalty.

By 2019, about 95 percent of the country will have health insurance if the law is allowed to take full effect, the Congressional Budget Office estimates.

Reams of court filings attest that the changes are being counted on by people with chronic diseases, touted by women who have been denied coverage for their pregnancies, and backed by Americans over 50 but not yet old enough to qualify for Medicare, who face age-inflated insurance premiums.

Republicans are leading the fight to kill the law either by the court or through congressional repeal. They say the worst fears about what they derisively call "Obamacare" already have come to pass in the form of higher costs and regulations, claims that the law's supporters dispute.

The White House says it has little doubt the high court will uphold the law, and that even its opponents will eventually change their tune.

"One thing I'm confident of is, by the end of this decade, we're going to be very glad the Republicans termed this 'Obamacare,' because when the reality of health care is in place, it's going to be nothing like the kind of fear-mongering that was done," said David Plouffe, a senior adviser to the president, said Sunday in an interview with ABC's "This Week."

Polls have consistently shown the public is at best ambivalent about the benefits of the health care law, and that a majority of Americans believe the insurance requirement is unconstitutional.