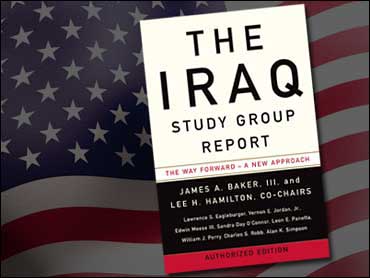 There is a simple way to describe the amendment offered by Sens. Ken Salazar, D-Colo., and Lamar Alexander, R-Tenn., to write into law the recommendations of the Iraq Study Group: It is a joke. It takes the hodgepodge of advice offered by the ISG and thoughtlessly throws it into legislation with no apparent consideration of its workability. If nervous Republicans think what their voters really want from them on Iraq is demonstrations of an utter lack of seriousness, Salazar-Alexander is the ideal vehicle for them.

It says that "it is the sense of Congress" that "subject to unexpected developments in the security situation on the ground, all United States combat brigades not necessary for force protection could be redeployed from Iraq by the first quarter of 2008." There is enough wiggle room here that Democrats dead-set on leaving Iraq won't endorse the bill. But even talking about March 31 as a goal for removing our combat brigades is irresponsible. If we were to end our combat role, the pressure we've put on al Qaeda would be lifted, the sectarian war would intensify, and whatever political leverage we have now would evaporate as the Iraqi government would begin to prepare for our departure.

Since these unfortunate developments would not be "unexpected," does that mean Salazar-Alexander would forbid the president to react to them with combat troops? Or, because our recent progress against al Qaeda has indeed been "unexpected," does that mean the president would be permitted to keep combat troops in Iraq? Does anyone even know? The March 31 date is arbitrarily drawn from a report that came up with its arbitrary date a full seven months ago.

Under the amendment, the only U.S. troops remaining in Iraq after the redeployment that "could" occur in early 2008 would be "those that are essential for," among other things, "conducting targeted counterterrorism operations" and "training, equipping and advising Iraqi forces." But these missions would be rendered all but meaningless by the lack of U.S. combat operations.

What we are engaged in right now with the troop surge is, in large part, a counterterrorism operation. We are sweeping al Qaeda from Sunni areas in Anbar Province and elsewhere, and meeting with significant success. Salazar and Alexander want to replace this counterterrorism success in reality with their fantasy counterterrorism. Since al Qaeda is waging a terrorist insurgency in Iraq, the only way to combat it effectively is with classic manpower-intensive counterinsurgency operations that involve securing the population and winning its trust and cooperation. This is what has been happening as the Sunni tribes aid us in fighting al Qaeda.

Salazar-Alexander would jettison this effort in favor of counterterrorism from afar. But the farther removed we are from the battle space, the better our intelligence must be. If it takes us 20 minutes now to mount a strike on an al Qaeda target, we need to know not just where the target is now but where he will be in 20 minutes; if it takes an hour, we need to know where he will be in an hour; if twelve hours, where he will be in twelve hours, and so on. Salazar-Alexander would necessitate that our intelligence grow ever more precise just as our sources of intelligence dry up, because Iraqis give us tips only when they feel safe enough to do so, and once we end our combat operations they will again be at the mercy of the country's armed extremists.

Besides which, al Qaeda in Iraq does not form large bases that are susceptible to attacks from a distance. They embed themselves in the population, which means they need to be extricated from the population in counterinsurgency operations. They are not building training installations in remote parts of the country the way al Qaeda did in Afghanistan prior to 9/11. Even then, the Clinton policy of "targeted counterterrorism operations" — i.e., the occasional cruise-missile strike — was an abject failure.

Salazar-Alexander's accent on training is just as dubious. Our trainers in Iraq are dependent on combat troops for the support structure, force protection, and rapid-reaction capability that they provide. Our combat troops can't be pulled out without debilitating the training mission. Also, as a practical matter, working alongside our combat troops is excellent training for the Iraqis. Our push into Baghdad as part of the surge has, according to USA Today's reporting, "improved the proficiency of Iraqi soldiers." If we end combat operations and sectarian violence picks up again, the Iraqi army will be torn apart at the seams, no matter how fervently Salazar and Alexander want to train it.

It's a popular sound bite in Washington to say that we shouldn't be policing a civil war in Iraq. But without tamping down that civil war, the goals that everyone professes to support — fighting al Qaeda and creating a professional Iraqi army — are impossible to achieve.

What would Salazar-Alexander substitute for the force of U.S. arms? Even more wishful thinking. It would "encourage other countries in the region to stop the destabilizing interventions" in Iraq. As if all the Iranians needed to stop their interventions were encouragement. Our ending combat operations would be all the encouragement they needed — to move even more forcefully into Iraq. The bill calls for, "if possible, military assistance from non-neighboring Muslim nations." As if all Iraq needed were a big infusion of Indonesian and Pakistani troops. The bill says we should "assist the Government of Iraq in achieving certain security, political, and economic milestones." As if we weren't already trying to do that.

President Bush is required to report back every 90 days about how he is implementing this policy. So about every three months he will have to tell Congress that, no, the Iranians haven't been "encouraged" to stop fomenting violence in Iraq yet, and no, troops from non-neighboring Muslim nations aren't yet answering our call to help police Iraq.

Republicans endorsing this amendment feel that they need to advocate something different than President Bush on Iraq, and that at least Salazar-Alexander leaves him room to maneuver. But enshrining a date for withdrawal into law, even if its vagueness gives the president an out, can only increase the momentum for a real withdrawal. The date will be understood by the public — and by our enemy and our troops — to have meaning, and can only undermine support for the war and our position in Iraq. The amendment's sponsors don't seem to understand that there are really only two options in Iraq — to continue with the surge or to pull out and admit defeat.

Salazar-Alexander is a textbook example of why foreign policy should not be made in Congress, where reality takes a backseat to logrolling and posturing. If these senators think the war is lost they should say so, and accordingly try to cut the funding for the mission, which is their constitutional prerogative. Otherwise, they shouldn't seek to hide behind a legislative muddle that could be very harmful. They call it a compromise. It's really an embarrassment.
By the editors of National Review Online
Reprinted with permission from National Review Online