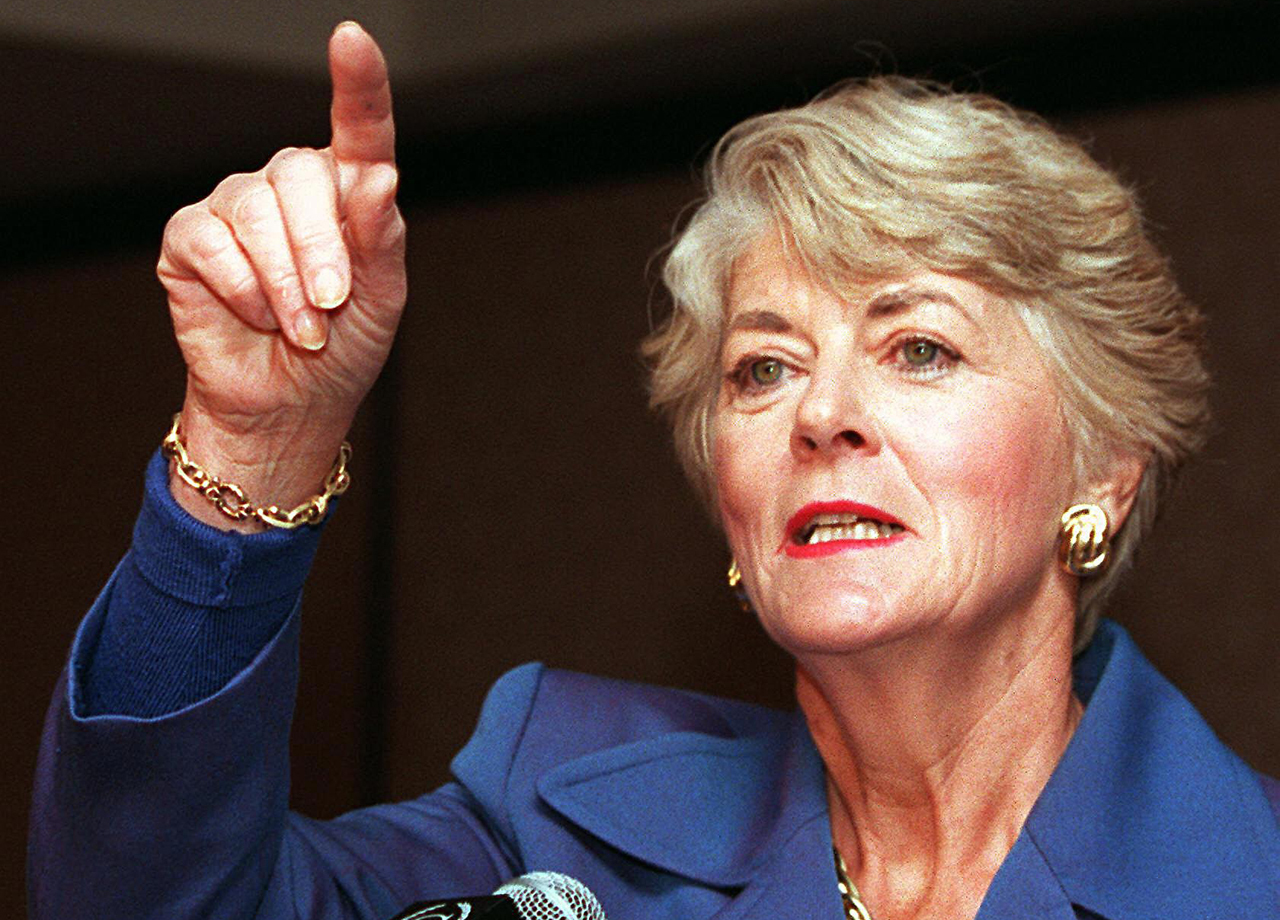 BOSTON - Geraldine Ferraro, the former New York Representative who became the first woman to run on a major party's presidential ticket, has died. She was 75.

Ferraro suffered complications from multiple myeloma, a blood cancer that she had battled for twelve years.

She passed away just before 10 a.m. Saturday morning at Massachusetts General Hospital, surrounded by her family, said Amanda Fuchs Miller, a friend acting as a spokeswoman for the family.

Ferraro was the first woman to run for U.S. vice president on a major party ticket, when the obscure New York City congresswoman was catapulted to national prominence at the 1984 Democratic convention. Former Vice President Walter Mondale chose her to run with him against incumbents Ronald Reagan and George H. W. Bush.

Today Mondale remembered his former running mate as "a remarkable woman and a dear human being."

"She was a pioneer in our country for justice for women and a more open society. She broke a lot of molds and it's a better country for what she did," Mondale told The Associated Press.

Delegates at the Democratic convention in San Francisco erupted in cheers when she accepted the party's vice-presidential nomination.

"My name is Geraldine Ferraro," she declared. "I stand before you to proclaim tonight: America is the land where dreams can come true for all of us."

"No one asks anymore if women can raise the money, if women can take the heat, if women have the stamina for the toughest political campaigns in this country," Judy Goldsmith, then-president of the National Organization for Women told People Magazine in December, 1984. "Geraldine Ferraro did them all."

But controversy accompanied her acclaim. Frequent, vociferous protests of her favorable view of abortion rights marked the campaign.

Ferraro's run also was beset by ethical questions, first about her campaign finances and tax returns, then about the business dealings of her husband, John Zaccaro. Ferraro attributed much of the controversy to bias against Italian-Americans.

Mondale said he selected Ferraro as a bold stroke to counter his poor showing in polls against President Reagan and because he felt America lagged far behind other democracies in elevating women to top leadership roles.

"The time had come to eliminate the barriers to women of America and to reap the benefits of drawing talents from all Americans, including women," Mondale said.

In the end, Reagan won 49 of the 50 states, the largest landslide since Franklin D. Roosevelt's first re-election, in 1936 over Alf Landon.

On Saturday former President George H.W. Bush issued a statement saying he and his wife Barbara were deeply saddened by the news of Ferraro's death, and described a friendship "marked by respect and affection.

"I admired Gerry in many ways, not the least of which was the dignified and principled manner she blazed new trails for women in politics," said Bush.

In the years after the race, Ferraro told interviewers that she would have not have accepted the nomination had she known how it would focus criticism on her family.

"You don't deliberately submit people you love to something like that," she told presidential historian Arthur M. Schlesinger Jr. in an interview in Ladies Home Journal. "I don't think I'd run again for vice-president," she said, then paused, laughed and said, "Next time I'd run for president."

Zaccaro pleaded guilty in 1985 to a misdemeanor charge of scheming to defraud in connection with obtaining financing for the purchase of five apartment buildings. Two years later he was acquitted of trying to extort a bribe from a cable television company.

Some observers said the legal troubles were a drag on Ferraro's later political ambitions, which included her unsuccessful bids for the Democratic nomination for U.S. Senate in New York in 1992 and 1998.

Ferraro, a supporter of Sen. Hillary Rodham Clinton, was back in the news in March 2008 when she stirred up a controversy by appearing to suggest that Sen. Barack Obama achieved his status in the presidential race only because he's black.

She later stepped down from an honorary post in the Clinton campaign, but insisted she meant no slight against Obama.

Ferraro received a law degree from Fordham University in 1960, the same year she married Zaccaro and became a full-time homemaker and mother. She said she kept her maiden name to honor her mother, a widow who had worked long hours as a seamstress.

After years in a private law practice, she took a job as an assistant Queens district attorney in 1974. She headed the office's special victims' bureau, which prosecuted sex crimes and the abuse of children and the elderly. In 1978, she won the first of three terms in Congress representing a blue-collar district of Queens.

After losing in 1984, she became a fellow of the Institute of Politics at the John F. Kennedy School of Government at Harvard University until an unsuccessful bid for the U.S. Senate nomination in 1992.

She returned to the law after her 1992 Senate run, acting as an advocate for women raped during ethnic conflict in the former Yugoslavia.

Her advocacy work and support of President Bill Clinton won her the position of ambassador to the United Nations Human Rights Commission, where she served in 1994 and 1995.

She co-hosted CNN's "Crossfire," in 1996 and 1997 but left to take on Chuck Schumer, then a little-known Brooklyn congressman, in the 1998 Democratic Senate primary. She placed a distant second, declaring her political career finished after she took 26 percent of the vote to Schumer's 51 percent.

In June 1999, she announced that she was joining a Washington, D.C., area public relations firm to head a group advising clients on women's issues.

Ferraro revealed two years later that she had been diagnosed with blood cancer. She discussed blood cancer research before a Senate panel that month and said she hoped to live long enough "to attend the inauguration of the first woman president of the United States."