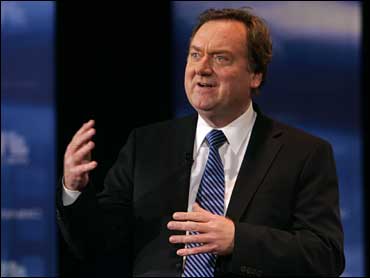 The death of NBC's Tim Russert has stunned the journalistic and political worlds. And his loss will reverberate through them - and our political system itself - for a very long time.

In over 15 years as moderator of NBC's "Meet the Press," Russert grilled candidates, congressional leaders, cabinet members and political activists of all stripes with a style that was respectful and fair but also confrontational. His show became a measuring stick for anyone seeking elevation to higher office, a gauntlet of sorts that had to be run by presidential candidates to prove their chops - the "Russert test."

With his background in law and active politics, Russert developed a style that was unique and effective, commonly confronting his guests with past quotes that differed from their current positions and staying on a single point until he received an answer. "Face the Nation" host Bob Schieffer, who competed with Russert each week on Sunday mornings said it best when he learned about the news. "Tim was the best of our profession. He asked the best questions and then he listened for the answer."

That style was on display not long after taking helm of the Sunday morning public affairs show. In 1992, a presidential candidate who was riding high in the polls named Ross Perot appeared on "Meet the Press." With diligent and specific questioning, Russert pinned down the candidate who was forced to admit that his deficit reduction plan didn't exactly add up. Russert, as the Washington Post wrote at the time, "so rattled the Texas billionaire that he announced he was cutting back on interviews to work on his policy prescriptions." Perot would swiftly see his political fortunes fade after that.

The impact Russert had stretched beyond Sunday mornings and he became an instantly recognizable face and voice for the network on the "Nightly News," the "Today Show," special events from Washington and, especially, election night. He did his homework, he remembered his lessons, and when Russert spoke, Washington listened.

But what separated Tim Russert from most political journalists was his ability to simplify seemingly complicated issues, to boil the story down to its essence and to communicate the excitement and joy he found in doing so. In the age of technological bells and whistles, fancy graphics and touch-screen computer maps, Russert preferred the unsophisticated.

Perhaps no story was more confusing than election night 2000, a night that would stretch on for weeks as two campaigns battled it out in the courts to determine the leader of the free world. It was on that night when he stripped all the technology away and pulled out a simple white board to break down the math and proclaim, in an observation that echoes today, that the whole election was boiling down to "Florida, Florida, Florida."

Even as the testaments continue to flow in from all quarters of the political and journalistic world, the loss of his voice from this campaign will not be replaced. Not everyone in politics or journalism had the privilege of working directly with Russert, but nearly everyone in Washington respected and admired him for both his work and his obvious love of -- and respect for -- a city and process that defines our democracy. Politics is not always pretty and it's rarely popular. But it is essential and Russert helped make it understandable and accessible. That's why journalism and politics won't be the same without him.