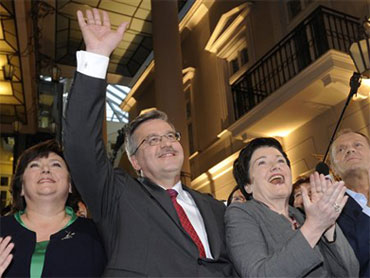 A somber election season in Poland was prolonged by two weeks Sunday when a first round of voting produced no immediate successor to Lech Kaczynski, the president killed more than two months ago in a plane crash.

The two leaders must now go head-to-head in a runoff vote on July 4, without eight other candidates who ran Sunday.

Kaczynski, 61, addressing supporters Sunday evening, made a rare reference to the plane crash that killed his brother, noting that the campaign has been anything but normal. He said "it's an election which is the result of a huge catastrophe, a huge misfortune, a huge tragedy."

An exit poll by Millward Brown SMG/KRC showed Komorowski with 45.7 percent of the vote and Kaczynski with 33.2 percent. A second poll, by OBOP, showed 41.2 percent for Komorowski and 35.8 percent for Kaczynski.

But as partial official results were reported several hours later, it appeared that Komorowski's lead was narrower than it originally seemed.

Based on 71 percent of voting stations reporting, Komorowski had 40.1 percent of the votes and Kaczynski had 37.4 percent, the State Electoral Commission said.

Komorowski, 58, told his supporters at a campaign night party in Warsaw that he felt "happy and fulfilled" knowing he has the "support and the trust of millions of voters in Poland."

"In life as in football, overtime is the most difficult. Let's not forget that and let's mobilize all our forces for the grand finale on July 4," he said.

The center-left candidate, Grzegorz Napieralski, was in third place, and the final outcome will hinge to a large degree on where his votes go. Partial official results showed that Napieralski has nearly 14 percent support.

Komorowski and Kaczynski are both former anti-communist activists, but they will both be scrambling in coming days to win over supporters of Napieralski's Democratic Left Alliance, heir to the once all-powerful communist party.

Napieralski said he will travel and meet with his supporters before deciding whom to endorse.

Sociologist Ireneusz Krzeminski said it is hard to imagine that the majority of Napieralski's voters could vote for anyone other than Komorowski. Napieralski's electorate tends to be liberal on social issues - supporting women's rights, gay rights and opposing the strong role played by the church in society. That puts it closer to Komorowski's Civic Platform, which appeals to secular and urban voters with its pro-business ethos, even though it pays little attention to ideological social issues.

A Millward Brown SMG/KRC poll for the all-news station TVN24 predicted that 66.5 percent of Napieralski's supporters will choose Komorowski in two weeks, and 29.6 percent Kaczynski. No margin of error was given.

But vacation season could also affect the outcome, with many wealthier Poles expected to be traveling and less likely to vote - a factor that could hurt Komorowski.

Kaczynski's base is made up of older, rural and religious Poles, and often pushes Catholic values, such as upholding the country's strict abortion laws and opposing gay rights.

The president is elected for a five-year term separately from the prime minister and his government. Although many of the duties are symbolic, the president can veto laws and, as commander in chief, has influence over foreign military missions.

President Lech Kaczynski and his wife were among 96 people killed when their plane crashed while trying to land in heavy fog in Smolensk, Russia, on April 10. The delegation included many high-ranking civilian and military leaders, and their loss provoked grief across the nation. Many called it the worst tragedy to strike Poland since World War II.

Komorowski is a leading member of the pro-European Union, moderate Civic Platform party, which governs the country. He has pledged to work closely with the government of Prime Minister Donald Tusk to adopt the euro in about five years, end the unpopular military mission in Afghanistan and promote pro-market reforms.

If he wins, that would give Civic Platform control of both presidency and government, ending divisions that caused frequent conflict during Lech Kaczynski's presidency. Economists expect it to pave the way for the government to push more pro-market reforms, such as privatizing more state companies and raising the retirement age, now 60 for women and 65 for men.

Kaczynski has made it a priority to fight crime and corruption, preserve a strong welfare state and promote Roman Catholic values. He is more skeptical about the European Union and adoption of the euro, saying it's too early to set a timetable for giving up the Polish currency, the zloty.

A former prime minister, Kaczynski is known for his nationalism and his combative stance, but he has struck a more moderate tone since his brother's death. Many Poles are unsure of whether the change is permanent or a campaign strategy to win over middle-of-the-road voters.