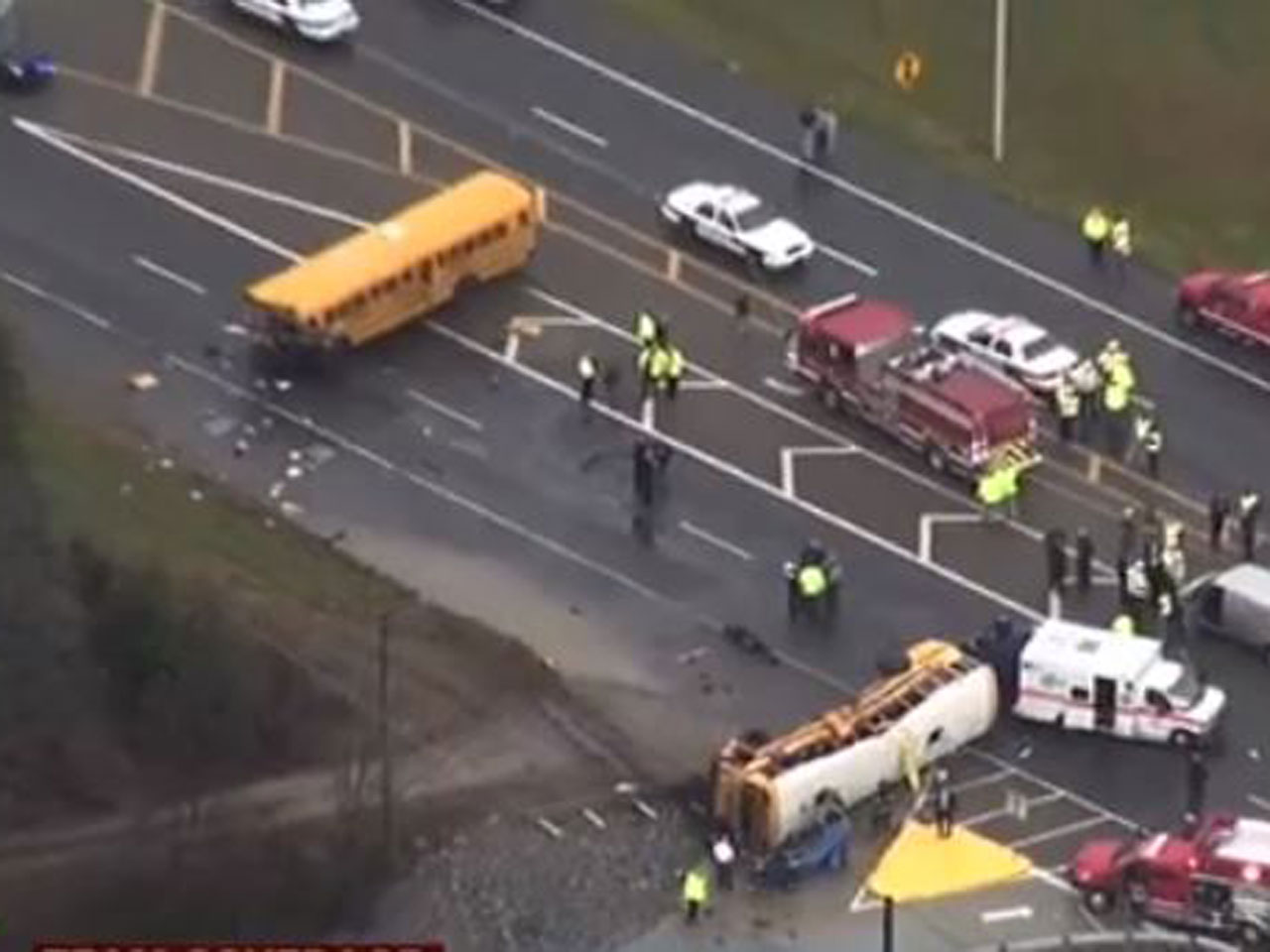 KNOXVILLE, Tenn. - The Knoxville community was deep in mourning Wednesday, a day after two school buses collided on a highway, leaving two primary school students and another person dead, as well as dozens of injuries.

While investigators from the National Transportation Safety Board were still en route to investigate the crash, police released their findings from a preliminary investigation at the scene.

According to police, Knox County school bus 44 from Chilhowee Intermediate School was traveling east on Asheville Highway when, for an unknown reason, it made a sharp left turn and crossed over a concrete median, reports CBS affiliate WVLT in Knoxville.

The second bus flipped onto its side and slid. Three people in that bus died, and another three suffered serious injuries.

Police identified the two children and teacher's aide who were killed as Zykia Burns and Seraya Glasper, both 7, and Kimberly Riddle, 46.

An additional 27 people were injured.

Police identified the most seriously injured children as Jaden Allen and Jada Parman, both 7. They were taken to the University of Tennessee Medical Center along with the driver of the first bus, James Davenport, 47.

The buses were packed at the time of the collision, reports CBS News correspondent Manuel Bojorquez.

Chilhowee Intermediate School fifth grader Joy Reinmann told WBIR-TV the crash threw students out of their seats "and everyone was on the floor and screaming and crying ... I thought I was going to die."

Reinmann said she tried to offer some comfort to other students who were scared, confused and hurt.

"Everyone just started crying, so I went over there hugging Lexi, my friend," she said. "Her nose was bleeding and her lip, and oh my gosh, everyone was just crying. So I went and hugged everyone."

Three seriously injured people were taken to the University of Tennessee Medical Center and were in stable condition on Tuesday, Rausch said. Six of the hospital's eight patients have been discharged, spokesman Jim Ragonese said. A seventh, identified by police as a 7-year-old girl, is in stable condition, he said. No information was given on the eighth patient.

East Tennessee Children's Hospital spokeswoman Erica Estep said another 20 children were treated there for injuries that were not life-threatening.

Rausch said 18 of the 20 had been on a bus going home from Sunnyview Primary School, which serves kindergarten through second grade. He described their injuries as "bumps and scrapes." They were taken to the hospital on a city bus "to be checked out," he said.

The other bus involved in the crash was from Chilhowee Intermediate School, which serves third through fifth grade. Rausch said some children from that bus were taken by their families to the children's hospital.

Miranda Stanifer's three girls made it out with a few bumps and scrapes -- shaken but otherwise okay.

"It was very emotional," Stanifer said. "Not only for them, but for all the parents, all the kids...a lot of them were bleeding, crying. Some of their parents weren't there yet and they were scared, it was just...scary."

Although classes have been cancelled, both schools will be open to students and family members in need of support so they can meet with grief counselors.

Tennessee Gov. Bill Haslam, a former Knoxville mayor, was holding a budget meeting on Tuesday. He spoke to reporters about the crash after hearing the news.

"Any crash is a horrible thing when you have fatalities, and children involved," he said. "It's hard to imagine a worse situation. Our hearts go out to all the families impacted."

"This is an unspeakable tragedy," he said. "This is what we work every day to try to prevent."