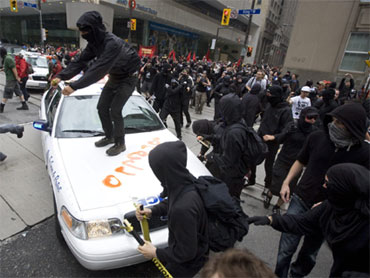 The streets of downtown Toronto were quiet early Sunday morning just hours after rioting by militant protesters threw the city's core into chaos.

Const. Michelle Murphy said there are also people who have camped overnight outside the prisoner processing center to protest the arrests.

She said police are still dealing with the aftermath of yesterday's activity which lasted till about 3 a.m.

On Saturday black-clad demonstrators broke off from a crowd of peaceful protesters and torched police vehicles and smashed windows with baseball bats and hammers.

Police used shields, clubs, tear gas and pepper spray to push back the rogue protesters who tried to head south towards the security fence surrounding the perimeter of the Group of 20 summit site.

Some demonstrators hurled bottles at police.

"These criminals attach themselves to legitimate protests for the sole purpose of engaging in acts of violence and destruction," Toronto Police Chief William Blair said.

"They deliberately provoke violent confrontation to draw the naive and the curious into their mob mentality," Blair told reporters.

The roving band wearing black balaclavas shattered shop windows for blocks, including at police headquarters, then shed some of their black clothes, revealing other garments, and continued to rampage through downtown Toronto.

Protesters torched at least three police vehicles in different parts of the city, including one in the heart of the city's financial district.

One protester jumped on the roof of one before dropping a Molotov cocktail into the smashed windshield.

Blair said the goal of the militant protesters was to draw police away from the security perimeter of the summit so that fellow protesters could attempt to disrupt the meeting.

Blair apologized for the destruction and added that police were aware of the identities of many members of the groups taking part.

"Over the past several days we have apprehended many of their leaders," he said, but added that many suspects remained at large.

Blair said officers had been struck by rocks and bottles and had been assaulted, but none were injured badly enough to stop working.

A stream of police cars headed to Toronto to reinforce security there after the smaller Group of Eight summit ended in Huntsville, Ontario, about 140 miles away.

Security was being provided by an estimated 19,000 law enforcement officers drawn from across Canada, and security costs are estimated at more than US$900 million.

Surveying the damage, many local residents spoke of their shock at witnessing the destruction.

"Well, this is pretty crazy, it's... I've never seen anything like this in Toronto before," one man said, saying it was more the kind of thing you would expect in places like Afghanistan.

The vandalism occurred just blocks from where U.S. President Barack Obama and other world leaders were meeting and staying.

Police in riot gear and riding bikes formed a blockade, keeping protesters from approaching the security fence a few blocks south of the march route.

Police closed a stretch of Toronto's subway system along the protest route and the largest shopping mall downtown closed after the protest took a turn for the worse.

Dozens of police officers later boxed in a number of protesters from both sides of a street in a shopping district. The protesters encouraged the media to film it and they sang "O Canada," Canada's national anthem, before being allowed to disperse.

At another location at the provincial legislature police also boxed in demonstrators before tackling some and making arrests.

Saturday's protest march, sponsored by labor unions and dubbed "family friendly," was the largest demonstration planned during the weekend summits.

Its organizers had hoped to draw a crowd of 10,000, but only about half that number turned out on a rainy day.

Toronto's downtown resembles a fortress, with a big steel and concrete fence protecting the summit site.

On Friday, hundreds of protesters moved through Toronto's streets, but police in riot gear intercepted them, preventing them from getting near the summit security zone downtown.

There were some 600 arrests and $3 million in property damage.

One man died after clashes with police at a G-20 meeting held in London in April 2009.

At the September G-20 summit in Pittsburgh, police fired canisters of pepper spray and smoke and rubber bullets at marchers.