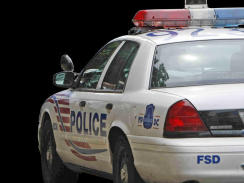 (CBS/AP) SANTA FE, New Mexico - A New Mexico police officer caught on camera having sex on the hood of a car has been fired.

The Santa Fe New Mexican reports that Officer Bert Lopez was dismissed from the New Mexico State Police. Lopez reportedly has 30 days to appeal the firing.

The surveillance photos were taken from a motion-triggered security camera positioned at the front gate of the county-owned La Bajada Ranch south of Santa Fe.

Two photos showing a uniformed officer having sex on the hood were forwarded to Santa Fe Sheriff Robert Garcia who identified the officer as being with the New Mexico state police. He forwarded the images to State Police Chief Robert Shilling.

After an internal investigation, Lopez, an eight-year veteran, was put on paid administrative leave for about three weeks. Police did not say if Lopez was on duty at the time of the incident.

This dismissal comes shortly after investigators said the officer did not commit a crime and that the sexual encounter was not in exchange for anything related to his position as a law enforcement officer.

"It is an embarrassing situation for the department, but we have to remember the rights of the employee afford him due process we must follow so we won't be commenting further," said spokesman Sgt. Tim Johnson.

The department refused to release the identity of the woman or details about her relationship with the officer. It was unclear when the photos were taken, but Garcia said he believed it was either late July or early August.

Lopez was named a 2009 state police office of the year and was awarded a "Challenge Coin" in July, an honor given to officers who have gone above and beyond the call of duty.