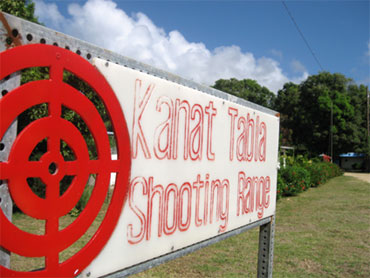 The gunman who killed four people and wounded nine in a shooting rampage on the Pacific island of Saipan was identified Sunday as a Chinese national believed to be employed at the shooting range where the deaths occurred.

Li Zhongren, 42, who killed himself after Friday's shooting spree, left several notes and authorities suspect the violence was linked to his personal finances and frustrations.

The police statement was the first official confirmation of his identity and shed light on what might have precipitated the worst violence on this normally tranquil island in recent memory.

Police also said for the first time that he wounded eight South Korean tourists, an increase from the five police reported earlier. They were shot at a popular tourist site in what police earlier described as a drive-by shooting.

Santiago F. Tudela, commissioner of the Department of Public Safety, sent his condolences to the victims and their families.

"Our prayers are with you all," he said.

Public Safety spokesman Jason Tarkong said a motive is still being investigated by local authorities, the FBI and the Bureau of Alcohol, Tobacco and Firearms, but it "may be related to issues about money and the suspect's emotional frustration."

Detectives found several notes left behind by Li, who had lived at the shooting range in Kannat Tabla that had been closed earlier this year.

"The notes were left in plain view for police to find and the incident seems premeditated," he said in a statement.

The violence erupted late Friday morning at the shooting range where Li was believed to be working as the caretaker. Two adults, a 4-year-old boy and a 2-year-old girl were shot to death, and a 4-year-old girl was critically wounded. They were all residents of the U.S. commonwealth.

The adult victims were identified as Enrique Naputi, 30, and Richard Borja Naputi, 22.

Police said Li then drove his white van to the tourist site where he fired a barrage of shots at the South Koreans. More than 50 tourists were sightseeing in the area known as the Last Command Post in Marpi, a World War II spot featuring remnants of American tanks. A memorial in the area is dedicated to Koreans who fought in the war.

Police believe the shooting was random and that Koreans weren't specifically targeted.

The suspect was last spotted driving toward Banzai Cliff, the site where numerous Japanese jumped to their deaths to avoid capture in 1944 after the Battle of Saipan. His body was found along the edge off the cliff with a .22-caliber rifle strapped around his shoulder.

Three rifles and more than 750 rounds of ammunitions were recovered from Li's van, which he set ablaze possibly to destroy personal identification and documents before shooting himself at the edge of Banzai Cliff.

The van is registered to the previous owner of the shooting range who died about a year ago.

The bloody attack left the island shaken and worried about how it may affect tourism, its economic lifeline.

Meanwhile, church and community groups held a candlelight vigil late Sunday at Saipan's American Memorial Park, for the victims of the shootings.

The most seriously injured South Korean, a 39-year-old man, suffered a gunshot wound to his back and was flown by a U.S. Air Force plane to Seoul for treatment.

Officials at Seoul National University Hospital identified him as Park Jae-hyung, a teacher from the southern town of Masan.

South Korea's Yonhap news agency reported that the visit to Saipan with his wife and friends was Park's first trip overseas, and the group had arrived on the Pacific island the day before the shooting. His wife was unhurt.

Saipan officials have had difficulties contacting Li's next of kin in the past two days and have requested the Chinese consulate in Los Angeles for help.

Saipan is the main island of the U.S. Commonwealth of the Northern Mariana Islands, which has about 60,000 residents and is about 3,800 miles southwest of Hawaii. Saipan is a popular tourist destination among South Koreans, with more than 111,000 South Koreans visiting the island in 2008, according to the Marianas Visitors Authority.
Associated Press writers Jaymes Song in Honolulu, Gemma Casas in Saipan and Hyung-jin Kim in Seoul, South Korea contributed to this story