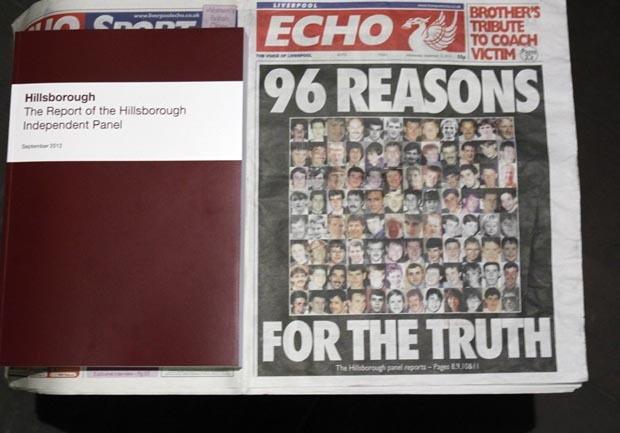 (AP) LONDON - British police and medics whose failures contributed to the deaths of 96 soccer fans in the country's worst sports disaster unfairly blamed the dead for the 1989 tragedy and sought to cover up their actions, newly disclosed documents revealed Wednesday.

The documents vindicated efforts by the victims' families, who had spent 23 years demanding a full accounting of the events at Hillsborough stadium that killed fans of the Liverpool soccer team. Most of the victims were crushed and suffocated in a standing-only section after they were herded there by police.

Timeline of major soccer stadium disasters throughout the world

Prime Minister David Cameron issued a full apology Wednesday for the wrongdoings of authorities and the subsequent cover-up, saying that Britain had been shamed for more than 20 years by its reluctance to expose the errors that led to the deaths. Lawmakers in the House of Commons gasped and wept as he spoke.

Relatives of the dead had suffered the "failure of the state to protect their loved ones and the indefensible wait to get to the truth - and the injustice of the denigration of the deceased, that they were somehow at fault for their own deaths," Cameron said.

"I am profoundly sorry for this double injustice that has been left uncorrected for so long," he told lawmakers.

The tragedy took place during an FA Cup semifinal between Liverpool and Nottingham Forest on April 15, 1989, at the stadium in Sheffield, northern England. A total of 94 supporters died at the scene - two more died later - and almost 800 others were injured when police officers herded around 2,000 Liverpool fans into caged-in enclosures that were already full.

The response to the disaster transformed British sports, bringing the introduction of all-seated soccer stadiums for elite clubs. That, in turn, helped the teams drive out the remnants of hooliganism that had long tainted British soccer and heralded a shift in the demographics of sports fans. Improved stadium safety meant more families and women attended matches, but having stadium seats also caused ticket prices to rise.

After an era in which violent English football fans had been the scourge of Europe, the changes eventually instilled new confidence in Britain's ability to host sports events. That attitude was reflected this summer in London's hugely successful - and trouble-free - hosting of the 2012 Summer Olympics and Paralympics.

Following a lengthy campaign by victims' relatives to learn the full details of the Hillsborough disaster, a government-appointed panel reviewed and released 400,000 pages of previously undisclosed documents from police, the government and local authorities.

Bishop James Jones of Liverpool, who led the panel, said the documents offered clear evidence of the failures by British authorities. He said they showed authorities' extensive attempts to shift blame for the tragedy onto fans and some proof that a number of Liverpool fans were denied medical treatment that could have saved their lives

"The tragedy should never have happened," Jones said. "There were clear operational failures in response to the disaster and in its aftermath there were strenuous attempts to deflect the blame onto the fans."

Panel member Dr. Bill Kirkup, previously associate chief medical officer at Britain's health ministry, told reporters evidence showed 41 of the dead had at least the "potential to survive," although he could not be certain that a speedier response would have saved them all.

Tests were carried out on possible alcohol levels in the bloodstreams of the dead - including children - for "no apparent medical reason," and police officers had consulted a national database to check whether victims had criminal records, all in an effort to "impugn the reputations of the deceased," the report said.

Among its other conclusions, the panel found that:

1. Problems with overcrowding and crushes at Hillsborough were well known but ignored by authorities.

2. A total of 116 of 164 police statements were amended to "remove or alter comments unfavorable to" South Yorkshire Police, while the South Yorkshire Metropolitan Ambulance Service also tampered with statements.

3. Police and ambulance staff were slow to act and interpreted crowd unrest as a prelude to a riot rather than a sign of distress.

4. The senior police officer at the stadium falsely told his superiors that Liverpool fans had broken into the stadium and caused the fatal crush, while then-Prime Minister Margaret Thatcher was told by police that drunkenness and violent crowd behavior were to blame.

Although some compensation payments have been paid by police, no individual or organization has ever faced criminal charges in connection with the Hillsborough calamity. James Saunders, a lawyer for the families of the victims, said Wednesday's disclosures meant that "those persons who have lied, concealed and distorted evidence should now be brought to account before the law personally."

Responding to the disclosures, lawmakers sharply criticized The Sun, Rupert Murdoch's tabloid, for its role in publicizing the false police allegations against Liverpool fans.

In an infamous front-page story headlined "The Truth," the newspaper inaccurately claimed that some fans had urinated on police officers who were attempting to resuscitate the dying and others had stolen from the dead.

Kelvin MacKenzie, editor of The Sun at the time, said he had "published in good faith and I am sorry that it was so wrong." Relatives dismissed his apology.

David Crompton, the current chief constable of South Yorkshire Police, also said he was "profoundly sorry for the way the force failed."

Liverpool captain Steven Gerrard, whose 10-year-old cousin Jon-Paul Gilhooley was the youngest fatality, praised the courage and dignity shown by the Hillsborough families and survivors.

"For 23 years they have fought for truth and justice on behalf of the victims and survivors of this terrible tragedy and all Liverpool supporters," Gerrard said. "Speaking as someone whose family directly suffered, I know the pain and hurt will remain. However, I hope that today's report helps bring some comfort, now that everyone knows what happened."

Cameron said Attorney General Dominic Grieve would likely apply to Britain's High Court to overturn the verdict from the original inquest hearing, which ruled in 1991 that the deaths were accidental. That would mean a new hearing into the Hillsborough deaths would take place.

Accidents at stadiums have plagued nations worldwide for decades. FIFA, the governing body for world football, says at least 1,500 people have died and about 6,000 were injured in 60 major incidents at sports events between 1971 and 2012.