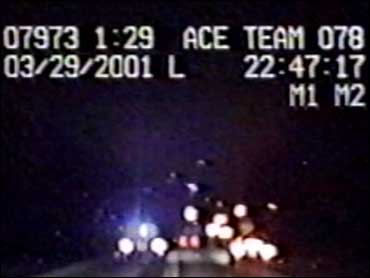 Video of a police chase that left a Georgia teenager paralyzed — the "scariest chase I've seen since 'The French Connection,"' one Supreme Court justice said — played a key role Monday in arguments over the actions of a sheriff's deputy.

A camera in the dashboard of the police cruiser that rammed Victor Harris's black Cadillac captured the sickening moment when Harris lost control and veered off the road and down an embankment.

Harris sued former Coweta County Sheriff's deputy Timothy Scott, accusing the deputy of violating his civil rights. The court is deciding whether the lawsuit can proceed in its first case in 20 years on police use of deadly force to stop fleeing suspects.

Several justices showed a close interest in the chase that preceded the crash, with an eye toward justifying Scott's action as reasonable to prevent injury to other drivers and pedestrians.

Justice Antonin Scalia referred to "The French Connection," the 1971 Oscar-winning movie with one of Hollywood's classic police pursuits. "It is frightening," he said of the Georgia video.

Justice Ruth Bader Ginsburg said Harris was endangering lives by fleeing from the police. "Anyone who has watched that tape has got to come to that conclusion, looking at the road and the way that this car was swerving, and the cars coming in the opposite direction. This was a situation fraught with danger," she said.

The video was not shown in the courtroom. However, four justices indicated they had watched a DVD of the chase, and the questioning by several others implied that they had as well. The availability of such a video to the justices is an uncommon occurrence in a court that hears its fair share of bankruptcy and tax cases.

When Harris's lawyer, Craig Jones of Atlanta, said his client was driving fast but not erratically, even using his turn signal before passing other cars, the justices were unimpressed.

"He used the turning signal. That's like the strangler who observes the 'no smoking' sign," Justice Anthony Kennedy said.

After an initial collision with the Harris' car, sheriff's Scott received permission from his superiors to ram Harris' car to end the chase, CBS News correspondent Thalia Assuras reports.

Harris won rulings from two lower courts that he could take his lawsuit to trial. Jones said police could have called off the chase and arrested Harris, who was being pursued solely for speeding, at a later date.

Jones cited the views of the 11th U.S. Circuit Court of Appeals portraying Harris' driving as under control despite the high speed.

Justice Stephen Breyer, however, said he saw the video differently, with Harris swerving around cars and weaving through traffic on the dark, wet road. But Breyer said he would play it again.

With another nod to Hollywood, Breyer said, "Suppose I look at the tape and I end up with Chico Marx's old question with respect to the Court of Appeals: 'Who do you believe, me or your own eyes?"'

A decision is expected before July.