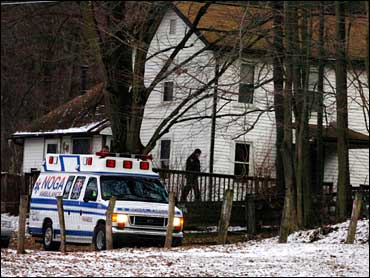 An 11-year-old boy shot his father's pregnant girlfriend in the back of the head while she was lying in bed in their western Pennsylvania farmhouse, then got on the school bus and went to school, authorities said Saturday.

Jordan Brown was charged Saturday as an adult in the shooting death of Kenzie Marie Houk, who was 8 months pregnant, Lawrence County District Attorney John Bongivengo said at a news conference.

Police say the shooting took place Friday between 7 and 9 a.m., reports David Hall of CBS Station KDKA in Pittsburgh. Police say that Brown shot Houk in the back of the head at point-blank with his own 20-guage shotgun, Hall reports.

The fifth-grader was picked up from school Friday by Pennsylvania State Police, who found Houk's body after her 4-year-old daughter told tree cutters working nearby that she thought her mother was dead, Bongivengo said.

The boy had told police there was a suspicious black truck on the property that morning, causing investigators to look into a false lead for about five hours, he said.

Inconsistencies in Brown's description of the vehicle led police to re-interview the victim's 7-year-old daughter, who implicated the boy in the killing, Bongivengo said.

"She didn't actually eyewitness the shooting. She saw him with what she believed to be a shotgun and heard a loud bang," Bongivengo said, adding that the weapon was found the boy's bedroom.

The shotgun is designed for children and such weapons do not have to be registered, Bongivengo said.

Local Video from KDKA in Pittsburgh

Brown's attorney, Dennis Elisco, said the evidence points to the gunshot wound being "consistent" with the boy's hunting gun, but he wanted to see stronger proof that it was Brown's.

"I believe Jordan did not do this and I'm looking forward to seeing the physical evidence to see if it matches with what I think happened," he said Saturday after meeting with the boy in jail.

The attorney also said he met with the boy's father, Christopher Brown, and planned to file a motion Monday to have the boy released on bail and move the case to juvenile court.

The attorney said Christopher Brown was "in a state of actual shock and disbelief." There was no indication the boy had a problem with Houk, he added.

"This is a tragic, extremely tragic situation, and it's way too early to have any substantive comment," Elisco said.

Police said they had no motive for the shooting, and Bongivengo would not say whether the boy confessed.

A preliminary hearing is set for Thursday.

A neighbor, Cameron Tucker, said Houk was engaged and had been renting the house for no more than a year. Tucker said he had never met Houk's fiance, but that both of them had children.

"She was very protective of her kids," he said, adding that she seemed very excited about her pregnancy.

Tucker's wife sometimes drove Houk's younger daughter to the bus stop because she went to preschool with the Tuckers' 5-year-old.

The rural community is about 35 miles northwest of Pittsburgh.