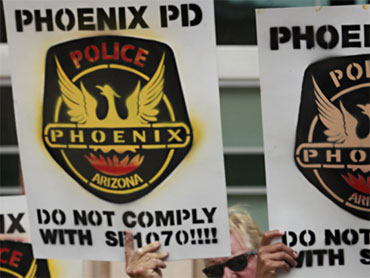 The sheriff of Arizona's most populous county is making room in a vast outdoor jail and determined to round up illegal immigrants to fill it. Police from the U.S.-Mexico border to the Grand Canyon are getting last-minute training. And protests and marches are planned throughout Phoenix.

Arizona's new immigration law takes effect Thursday, creating a potentially volatile mix of police, illegal immigrants and thousands of activists, many planning to show up without identification as a show of solidarity.

At least one group plans to block access to federal offices, daring officers to ask them their immigration status.

"Our message for that day is: 'Don't comply, don't buy,"' said activist Liz Hourican, whose group, CodePink, plans to block the driveway for immigration offices in downtown Phoenix.

But Maricopa County Sheriff Joe Arpaio said Wednesday that if protesters want to block his jail, he'll put them in it.

The Arizona law, which takes effect Thursday, requires officers enforcing other laws to check a person's immigration status if they suspect the person is in the country illegally.

He says it's "a crime to be here illegally and everyone should enforce" the law.

As both sides prepare, a federal judge is deciding whether to step in to block the law. It requires officers enforcing other laws to check a person's immigration status if they suspect the person is in the country illegally. It also bans illegal immigrants from soliciting work in a public place.

Police across the state scrambled on Tuesday to train officers, including on how to avoid racial profiling, and plan for a potential influx of detainees.

The hardest-line approach is expected in the Phoenix area, Arpaio plans his 17th crime and immigration sweep. He plans to hold the sweep, regardless of any ruling by U.S. District Judge Susan Bolton.

Arpaio, known for his tough stance against illegal immigration, plans to send about 200 deputies and volunteers out, looking for traffic violators, people wanted on criminal warrants and others. He's used that tactic before to arrest dozens of people, many of them illegal immigrants.

He said that the space he made in the complex of military surplus tents can handle 100 people, and that he will find room for more if necessary.

Elsewhere in the state, police officials said they didn't expect any dramatic events. They were busy wrapping up training sessions this week, with some agencies saying that untrained officers will not be allowed on the streets.

Many of the state's 15,000 police officers have been watching a DVD released this month that signs that might indicate a person is an illegal immigrant are speaking poor English, looking nervous or traveling in an overcrowded vehicle. It warned that race and ethnicity do not.

Some agencies added extra materials, including a test, a role-playing exercise or a question-and-answer session with prosecutors.

Critics of the law among police chiefs remain, saying that the law is so vague that no amount of training could eliminate potential confusion.

"Am I going to sit here and say I think every officer has a clear understanding of the law when they leave the training?" Tucson Police Chief Roberto Villasenor said. "No, because I think the law is poorly constructed."

Arizona's law gives police two options to confirm whether a detainee is an illegal immigrant.

Virginia Kice, a spokeswoman for U.S. Immigration and Customs Enforcement, declined to comment on preparations or the role federal authorities would play in enforcing the law, except to say ICE "focuses first on criminal aliens who pose a threat to our communities."

Arpaio vowed to arrest all illegal immigrants and make them spend time in his jail. Other police officials said they'd try to get the Border Patrol involved as often as possible to avoid the time and cost of booking the detainees into jail.

Prosecutors are also preparing for a potential influx of cases. They are reminding officers that they are required to explain the circumstances of the original stop, why they suspected the person was an illegal immigrant and any comments made by the suspect.

A march from the state Capitol is planned at 4:30 a.m., followed by a prayer service, a rally outside Arpaio's office and later that afternoon a concert outside a Maricopa County jail, according to the Los Angeles-based National Day Laborer Organizing Network.

The protesters both from Arizona and elsewhere plan to show up without identification and hold peaceful rallies.

"It's defiance, to see if they want to come and arrest those people," said Pablo Alvarado, the executive director of the NDLON. "We dare them to come and ask."