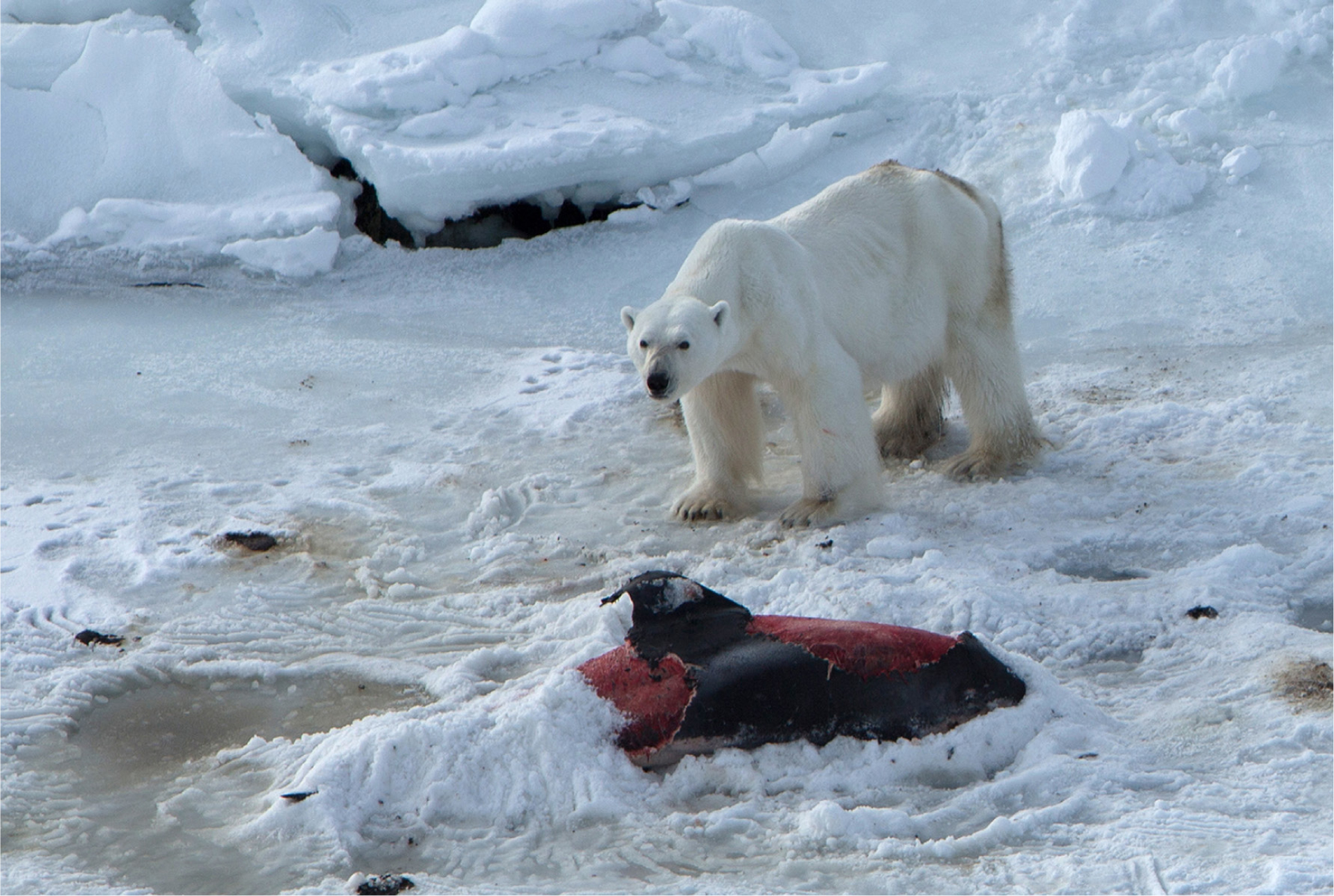 Faced with a rapidly changing habitat, polar bears are adapting with a new entrée: For the first time, a polar bear was seen preying on a white-beaked dolphin carcass that had been trapped in the ice in Svalbard, a group of Norwegian islands in the Arctic Ocean.

In April 2014, a male polar bear with a full belly was spotted near a recently devoured white-beaked dolphin, which could have weighed 120 to 680 lbs. (54 to 308 kilograms) and measured 5 to 9 feet long (1.5 to 2.7 meters), the researchers said in an article published online June 1 in the journal Polar Research. The bear was also seen with another white-beaked dolphin's thawing carcass, which he was likely saving for a later meal.

These dolphins rarely venture so far north in the Arctic; they prefer the sub-Arctic, which has less sea ice and more open water. "If it had been a more usual sea-ice year, I do not think the dolphins would have been that far north in the spring," said Jon Aars, primary author of the study and a research scientist at the Norwegian Polar Institute. [See Stunning Photos of the Polar Bears Eating Dolphins on Svalbard]

The surface water temperature of the Arctic Ocean surrounding Svalbard has increased significantly over the past 45 years, leading to decreases in summer sea-ice cover over the entire Arctic Ocean and extreme melting during 2007, according to research published in 2008 in the journal Geophysical Research Letters.

Prior to this study, the white-beaked dolphin (Lagenorhynchus albirostris) had not been spotted in winter or spring so far north in Svalbard. Although the fjords and coast of northern Svalbard are usually covered by ice, they were ice-free in the winter of 2013 to 2014, according to the study.

The dolphins likely made their way to this northern area when the ice had melted, but were trapped when strong northerly wind packed drift ice onto the fjords, the researchers speculated. Similar dolphin entrapment has been recorded off the coast of Newfoundland, a Canadian island off the east coast of the mainland, as reported in studies in 1957 and 1996.

The polar bear observed feeding on a dolphin likely grabbed its prey from an oval-shaped hole in the sea ice measuring about 2 feet by 2.5 feet (60 by 75 cm). The hole was covered with slushy ice, and surrounded by sea ice a little more than half a foot (20 cm) thick. The hole marked the only break in solid sea ice, and was likely a "breathing hole" kept open by the dolphins after they made their way to the fjord during the ice-free stint. Breathing holes can be miles apart, and the researchers found no other open cracks or holes in the vicinity. Dolphins can be trapped in the ice and drown, or killed by whales and bears while catching a breath of air.

"We were surprised, as we had not thought we would see dolphins in that area that time of year, and also because polar bears [had previously not been] recorded taking or eating dolphins," Aars told Live Science in an email. "We were not so surprised of bears being able to take dolphins, given the dolphins were there." He noted that polar bears are also known to devour belugas and narwhals, both of which are larger than the dolphins.

Frozen dolphin carcasses could provide a significant source of food for the polar bears, which may lose access to their usual meals of ringed and bearded seals as climate change impacts their habitat, the researchers concluded. During the ice-free summer and autumn following the first April siting, at least seven different white-beaked dolphin carcasses were discovered in the same area as the first. "With longer periods without sea ice, bears will look for alternative food sources," Aars said.