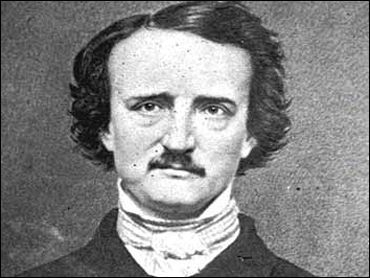 Edgar Allan Poe apologizes to his publishers for drinking too much and asks them to buy an article because he's "desperately pushed for money" in an 1842 letter acquired by the University of Virginia for an exhibition marking the author's 200th birthday.

Writing from Philadelphia, Poe blames his friend William Ross Wallace, a poet and lawyer, for making him drink too many "juleps" and for misbehaving on a visit to New York.

The university bought the July 18, 1842, letter in a Sotheby's auction after the document spent years in private hands. University officials declined to disclose the price, but said it was purchased with endowment funds.

"Will you be so kind enough to put the best possible interpretation upon my behaviour while in N-York?," Poe asks New York publishers J. and Henry G. Langley. "You must have conceived a queer idea of me - but the simple truth is that Wallace would insist upon the juleps, and I knew not what I was either doing or saying."

He closes the letter expressing his hopes that he'll see the Langleys again "under better auspices." The enclosed article was rejected, but published elsewhere later that year.

The letter was first disclosed in an American literary magazine in 1957, according to the 2008 edition of "The Collected Letters of Edgar Allan Poe." It was formerly in a private collection and, before the University of Virginia acquisition, most recently purchased at auction by an undisclosed buyer for $26,000 in May 1988, according to Chris Semtner, curator of the Edgar Allan Poe Museum in Richmond.

The University of Library released the letter this week ahead of an exhibit opening Saturday that highlights Poe's enduring literary works, brief life and mysterious death at the age of 40. Poe attended the Charlottesville university, but had to drop out after less than a year in part because of financial difficulties, which plagued him the rest of his life.

"From Out That Shadow: the Life and Legacy of Edgar Allan Poe" is being held in honor of the 200th anniversary of the author's birth on January 19, 1809. It features more than 100 items related to Poe, including manuscripts of his iconic works such as "The Raven," original artwork and personal belongings including his writing desk and portraits of Poe and his mother.

The exhibit runs through Aug. 1, then will open at the University of Texas.

Poe is credited with writing the first modern detective story, "The Murders in the Rue Morgue," which appeared in 1841 in Graham's Magazine, where Poe worked an editor. It became the template for subsequent mystery stories, including the Sherlock Holmes works.

The writer's other macabre works include "The Black Cat," "The Tell-Tale Heart" and "The Pit and the Pendulum," which have frightened generations of readers and reflected Poe's struggles with depression, difficulties with drinking, and the loss of key figures in his life.