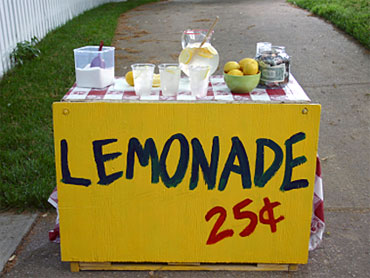 (CBS) SALEM, N.H. - A 7-year-old New Hampshire girl is taking it upon herself to repair a playground burned down by arsonists, CBS Boston reported..

Cheyenne Barrett opened a lemonade stand Monday to raise money to rebuild the playground at the Haigh Elementary School in Salem.

"I thought it would be good for this school. We would have more fun stuff to play on," Barrett said.

Plenty of customers, including members of the local fire department, stopped by to donate and sip lemonade.

By closing time, Cheyenne had raised $273 - that's nowhere close to the estimated replacement cost of $40,000, but principal Christine Honey-Nadeau says the second-grader has inspired many more to help.

"So there is a possibility, depending on fundraising and insurance, that we might be able to rebuild a structure similar to what we had," Honey-Nadeau said. "We always say something good comes out of something bad. It's brought our school community even closer, (with) people lending a hand to help."

It sounds like the kind of story you'd expect to hear at one - or both - political conventions.