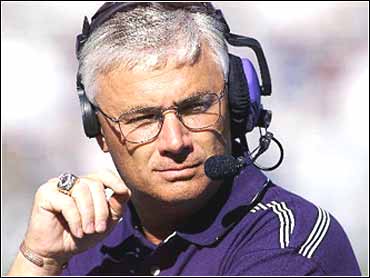 Alabama freshman football player Albert Means has decided to withdraw from school amid allegations that his high school coach steered him to Tuscaloosa for thousands of dollars.

The university will recommend that Means be unconditionally released from his national letter of intent, giving him three years of eligibility.

After meeting with Tide coaches, Means said Friday night that he made the decision because he "wanted to be closer to my home and help my family" in Memphis.

The unconditional release means the highly touted defensive tackle will only have to sit out one year, instead of two, if he transfers to another Division I-A school.

National letter of intent guidelines would otherwise have required Means to sit out two seasons because he failed to complete the academic year.

Kirk said Alabama boosters in the Memphis area made three installment payments of $10,000 each to Lang, who sometimes left during practice to go get the money.

"Then on the fourth, when he signed, the other $170,000 was delivered," said Kirk, who denied knowing exactly who paid the money. Kirk said he, too, was initially supposed to get some of the money, but never received his share.

Lang called allegations of a payoff "totally false." Former Alabama assistant coach Ivy Williams, who recruited Means, said "no one asked me for anything."

Means played in seven games in 2000, starting three and making 18 tackles and two stops behind the line. He was considered the nation's top defensive line prospect last year.

Kirk's allegations are under review by Tennessee athletic regulators, the Southeastern Conference and the NCAA.

Lang and Kirk, who now works at Sheffield High in Memphis, were suspended from their jobs after the payoff allegations became public this week.

Kirk said Lang told him the money came from Alabama boosters. He told The Birmingham News that Lang left practice early on several occasions to receive $10,000 payments and got the rest of the $200,000 in December.

Asked how he knew Lang got the rest of the money, Kirk said that Means "wouldn't have gone if (Lang) didn't get his money."