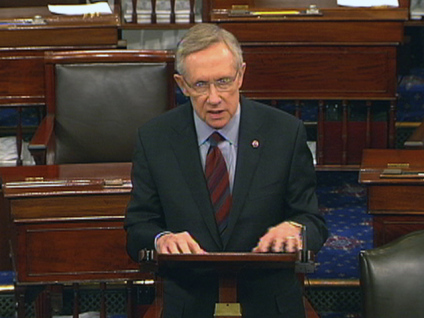 Senate Majority Leader Harry Reid said on the Senate floor Friday morning that the only issue holding up a budget deal to avert a government shutdown is funding for Planned Parenthood and other organizations that provide women's health services.

"Republicans want to shut down our nation's government because they want to make it harder for women to get the health services they need," the Nevada Democrat said, adding that he is "personally offended" by the GOP position. The majority leader suggested Republicans are asking him to sacrifice the health of his wife and other women in his family in order to reach a deal.

"It has nothing to do fiscal integrity of this country, it has everything to do with ideology on that side of the Capitol," Reid added in separate comments.

Reid noted on the Senate floor that the issue was not abortion, since federal funds cannot legally be spent on abortions (under the Hyde amendment). He said at issue were health services like cancer screenings. Planned Parenthood and similar organizations get money for health services through legislation known as Title X. They use other funding services to pay for abortion services.

Reid blamed the Tea Party's "extreme social agenda" for the situation, adding there is a willingness to "throw women under the bus even if it means they'll shut down the government."

A debate over social issues, he said, doesn't belong in an "urgent bill to keep the government running."

"There's only one reason that we do not have an agreement as yet and that issue is spending," he said.

Boehner then added, however, that "we are close to a resolution on the policy issues" - an apparent admission that there is not a deal on that front. Republicans have insisted on including a variety of policy riders in the legislation to fund the government for the rest of the fiscal year, including ones dealing with women's health, the environment and moving prisoners from Guantanamo Bay to the United States.

The two parties have been jockeying for the moral high ground ahead of a possible government shutdown beginning tomorrow. Republicans have cast the standoff as the result of unwillingness by Democrats to adequately begin addressing the massive deficit and debt. Democrats have cast the GOP as hostage to the Tea Party and interested in pushing an extreme social agenda instead of finding compromise.

Reid said Friday morning that the two sides had agreed on a budget that would cut $38 billion, though Republicans deny that claim. He also said Democrats are working on a short-term funding measure that would avert a shutdown.

Republicans yesterday passed a measureof their own to keep the government open for another week - but President Obama vowed to veto the bill, which includes $12 billion in cuts not agreed to by Democrats and an abortion-related policy rider. The president said he would consider a "clean" short-term bill if negotiations were moving forward.