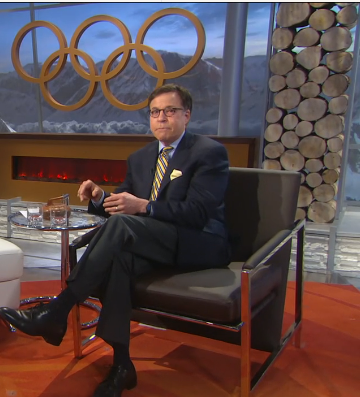 “As a practical matter, I simply couldn’t do my job because my eyes had become so blurry, watery and sensitive to light,” Costas said in a NBC news release. “I’m hopeful the symptoms will improve in the next couple of days and I can return to the broadcast.

This marks the first time since 1998 that someone other than Costas will host the Olympic primetime show, NBC said. Matt Lauer will be taking over his responsibilities.

Viewers of the broadcast may have noticed the veteran broadcaster wearing glasses instead of contact lenses, with redness visible in his eyes. He told the New York Times when he woke up Tuesday, both eyes were swollen and crusted shut. He told the paper the problem first started last Thursday.

“You hear it called pinkeye or conjunctivitis, but, as a practical matter, I haven’t had it before. You have swelling and stinging and burning and eventually tearing,” Costas told the New York Times. “And last night was the most difficult night of the five.”

Conjunctivitis refers to a swelling of the thin layer that lines the inside of the eyelid and covers the white part of the eye, what’s known as the conjunctiva. Symptoms include itching, a pink or a red color in the white of the eye, discharge and crusting.

It is most commonly caused by viruses, bacteria and allergens. Chemicals, fungi, certain diseases, and prolonged contact lens wear can also cause the eye disease. Costas said he had a viral infection.

“If it was just discomfort, I’d be there,” Costas said in the news release. “I’m receiving excellent treatment…it’s a viral infection, and all you can do is try to manage the symptoms while the virus runs its course.”

Typically the infection will start in one eye and spread to the other within days, and clears up without causing long-term problems within one or two weeks, according to the Centers for Disease Control and Prevention.

Severe cases may take up to three weeks or longer to clear, and may cause vision complications.

Treatments include artificial tears, cold packs and compresses to relieve inflammation and dryness. Antiviral medications may treat more severe forms of the disease, but antibiotic eye drops won’t help the infection unless bacteria is the root cause.

Often mild cases clear up without any treatments, the CDC said.

To prevent getting pinkeye, wash your hands often with soap and water, and avoid touching or rubbing your eyes. It’s also a good idea to wash your hands after applying eye drops or ointment, and to avoid sharing towels, blankets, pillowcases, eyeglasses and makeup.