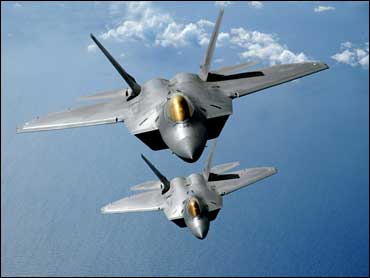 The F-22A Raptor crashed at 10 a.m. about 35 miles northeast of Edwards Air Force Base in the Mojave Desert. The Bureau of Land Management identifies the area as Harper Dry Lake, a vast and empty expanse of sometimes marshy flat land.

The pilot was David Cooley, 49, a 21-year Air Force veteran who joined Lockheed Martin in 2003, the company said in a statement. It did not release any details of the accident, including whether Cooley attempted to eject.

A statement issued by Edwards said first responders transported Cooley from the crash scene to Victor Valley Community Hospital in Victorville, where he was pronounced dead.

Cooley, of Palmdale, Calif., was part of a team of company and Air Force pilots who conduct F-22 testing.

"We are deeply saddened by the loss of David and our concerns, thoughts and prayers at this time are with his family," the statement said.

Sam Grizzle, a spokesman for Lockheed Martin Aeronautics Co., said no additional information would be released.

A board of officers is investigating the crash, the Edwards statement said. The Air Force urged people to stay away from the site because hazardous materials may have been released.

"This is a very difficult day for Edwards and those who knew and respected Dave as a warrior, test pilot and friend," said Maj. Gen. David Eichhorn, the Air Force Flight Test Center commander.

The jet, assigned to the 411th Flight Test Squadron of Edwards' 412th Test Wing, was on a test mission, said Air Force Maj. David Small at the Pentagon. Small did not know the nature of the mission.

The radar-evading F-22s each cost $140 million and are designed for air dominance. The warplanes can carry air-to-air missiles but are capable of ground attack as well.

The $65 billion F-22 program is embattled, with some opponents contending that a different warplane under development, the F-35 Joint Strike Fighter, is more versatile and less costly at $80 million per plane.

F-22s were grounded for two weeks after one crashed at Nellis Air Force Base in Nevada in December 2004. They were cleared again to fly after a review, and an Air Force statement at the time said officials were "highly confident in the design, testing and development" of the aircraft. The pilot in that crash successfully ejected.

It is trying to persuade the Pentagon to buy as many as 20 more F-22s. The military is expected to signal its intentions when the 2010 Defense Department budget is released next month.

The F-22 is able to fly at supersonic speeds without using afterburners. That allows it to reach and stay in a battlespace faster and longer without being easily detected.

The fighter, powered by two Pratt & Whitney engines, is 62 feet long, has a wingspan of 44½ feet and is flown by a single pilot.