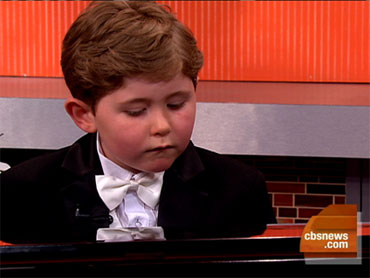 It's a thrill for any musician to play New York's Carnegie Hall. But how much more exciting -- and scary -- is it for a 6-year-old?

Sunday night, a very young pianist from Granville, Ohio, named Gavin George was given that chance. He wowed the audience with Mendelssohn's Venetian Gondola Song No. 2.

On "The Early Show" Monday, Gavin said performing at the famed hall was above-all "exciting." He said he got a "tiny bit" nervous before his performance, but after that, he said, "it was just me and the piano."

Gavin's mother, Mary, said on "The Early Show Monday he began to love music around age 2. "He had a passion for (music)," she said, "and he would just drum everything and he wanted to hear music all the time."

She said she and her husband aren't musicians. Gavin, on the other hand, is a completely different story.

Gavin got his start when the family was given a piano. He began playing at 3-and-a-half years old with the Suzuki Program for young musicians. Mary said her son could also read books by age 3. He was reading music by the time he was 4.

The first-grader was selected to play at Carnegie Hall after winning a gold medal at the American Association of Development of the Gifted and Talented in March 2010.

For more with this amazing child prodigy, click on the video below.