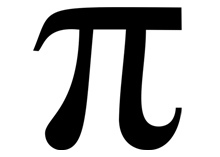 Happy Pi Day! Fans have decided to commemorate the mathematical constant on March 14 for years, but it was until 2009 that Pi Day was designated by the U.S. House of Representatives.

Celebrants around the world honor the day in a myriad of wacky ways, including using actual pies to try to calculate the number Pi.

This year, Make magazine is paying tribute by giving one simple tip: How to remember Pi to 15 digits. The website reposted a note by American mathematician Rudy Rucker that says the best way to remember the first 15 digits of Pi is by counting the letters in this phrase:

"How I need a drink, alcoholic of course, after the heavy lectures involving quantum mechanics."

It's quite a mouthful, but people who are better with words than numbers may find it useful.