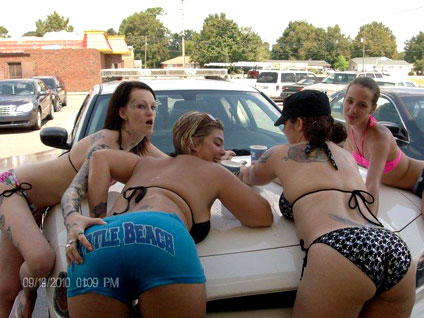 MONCKS CORNER, S.C. (CBS/AP) A South Carolina police officer has been relieved of his duties after a photo surfaced on Facebook of scantily-clad women posing on the hood of his town police cruiser.

However, he is not the only one suffering the consequences surrounding the scandalous photo.

One of the women who participated in the bikini car wash fundraiser, "Tits n Tats," and is featured in the photo pin-up, is a Berkeley County sheriff's deputy, and might lose her job too, according to The Post and Chronicle.

Berkeley County Attorney Nicole Ewing confirmed Wednesday that one of the women in the photo is a sheriff's deputy and says the case has been turned over to the sheriff's office in order to determine if the deputy broke any policies or procedures by participating in the charity event.

Moncks Corner Police Chief Chad Caldwell did not identify either of the parties involved in the making or posting of this photo and would not comment on whether the police officer was fired or asked to resign.

Josh Badgett, owner of the tattoo studio that sponsored the car wash, claims that there is nothing wrong with the event which features employees from Diamonds North night club in North Charleston...only one of them is a dancer.

"The girls were washing cars. There was nothing illegal," Badgett told The Post and Chronicle. "I don't understand why people are making such a big deal out of it. If Girl Scouts were out there washing cars, would there be a problem?"