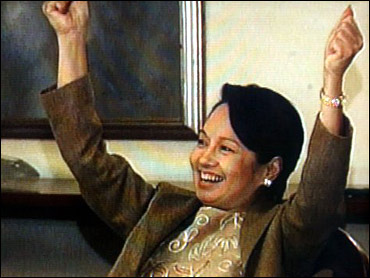 Annoyed by a stream of unwanted kisses, President Gloria Macapagal Arroyo warned overzealous male fans and supporters Wednesday that to avoid embarrassment they should not pucker up in her direction.

"First, show some respect. Secondly, I am conservative. I do not want to be kissed by any man but my husband," she told a town hall meeting in Laguna province, south of Manila.

Arroyo often receives kisses on both cheeks by unknown admirers in a practice known locally as "beso-beso" ("kiss-kiss").

Citing her conservative nature, Arroyo said she would only accept kisses from her husband, lawyer Jose "Mike" Miguel.

"Please, all the men in the country, so that I won't be rude to you, do not attempt to kiss me," she said.

The 57-year-old president was responding to an emcee at the meeting who joked that a man in the crowd wanted to kiss her but that he hesitated because he hadn't brushed his teeth.

Her statement was carried live on the nationwide ABS-CBN cable television.

During a visit to meet Filipino workers in Kuwait last year, one of Arroyo's female bodyguards shoved away a man who approached the president with his lips puckered and ready to plant a kiss on her cheek.

A picture of the man's foiled advance was published by many local newspapers.

The presidential palace then announced that no one should ever try to claim a smacker from Arroyo, who is always protected by her troop of bodyguards.