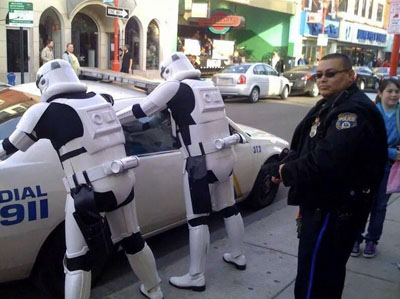 PHILADELPHIA -- Philadelphia's police department says it would crack down on online Star Wars spoilers if it could.

A photo posted on the department's Facebook page shows two "storm troopers" -- characters in the new film -- seemingly getting arrested on South Street. The caption reads "No, posting #StarWarsForceAwakens spoilers online is not a crime. Yes, it should be." It adds that "any illegal Sith behavior will still be prosecuted to the fullest extent of the law."

House Speaker Paul Ryan chimed in on the matter Wednesday, pinning the police department's stance to his Twitter feed with the comment "Knew we forgot to put something in the omnibus." The Wisconsin Republican was referring to an appropriations bill that requires one vote but combines several measures.