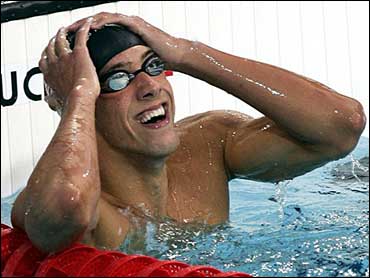 Michael Phelps won his first Olympic gold medal and broke his own world record in the 400-meter individual medley on Saturday, an impressive start to his quest to eclipse Mark Spitz's 1972 record of seven gold medals.

Ian Thorpe of Australia won a gold medal in the 400-meter freestyle.

Jenny Thompson lost out on a record-tying ninth Olympic gold medal, giving up the lead on the final lap as Australia won the women's 400-meter freestyle relay with a world record of 3:35.94.

Li scored 10.6 on her final shot, surpassing Lioubov Galkina of Russia. Galkina had led throughout the round, but got only 9.7 on her final shot - her lowest mark. Katerina Kurkova from the Czech Republic won the bronze.

Wang finished with an Olympic-record 690 points. Nestruev's 689.8 was the second-highest total in the games' history.

China leads the medal count after day one with six, four of them gold. Australia has five with two gold, and the U-S swim team produced five in all, one of them gold. Russians won four medals on day one.Host Greece's most celebrated athlete is suspended. Kostas Kenteris and fellow sprinter Katerina Thanou missed drug tests earlier this week. Their coach also is suspended.

Kenteris won the 200-meter in Sydney. Thanou was the 100-meter silver medalist four years ago.

NBC has bet billions of dollars that Americans will get hooked on the Athens Games. Friday's opening ceremony averaged 25.1 million viewers, down from the 27.3 million who watched opening night in Sydney four years ago, according to Nielsen Media Research. The 56 million who tuned in to at least part of the ceremony was identical to 2000's figure.The U.S. women's basketball team routed New Zealand in its Olympic opener. Five Americans scored in double figures, turning it on after a slow start.

The U.S. team won without starting guard Katie Smith, who was sidelined by a bruised right knee. She hasn't practiced since the WNBA season ended July 31 and it's uncertain when she'll play.

Brazil set the women's Olympic basketball record for points and tied the mark for margin of victory with its 128-62 win over Japan.

Jennie Finch didn't allow a hit in three innings, and the Americans began their run toward a third straight gold medal with a shortened victory over Italy.

Natasha Watley went 4-for-4, hitting a two-run triple in the fifth inning to put the United States up by seven runs, invoking the mercy rule that ended the game. Three-time Olympian Lisa Fernandez had an RBI single as the U.S. team extended its winning streak to 71 straight games since July 2003.

Abby Wambach scored her 16th goal in 17 games to help the United States beat Brazil in women's soccer. Wambach made a brilliant run in the 77th minute after Mia Hamm opened the scoring in the 58th minute on a penalty kick.

The U.S. team became the first side to earn a berth in the quarterfinals. The Americans can clinch their group with a win or a tie against Australia in their final first-round match Tuesday.

Middleweight Andre Dirrell started the American boxing schedule by beating China's Ha Dabateer on points, 25-to-18. Two-time U-S champion Andre Ward, who hasn't lost since 1998, drew a first-round bye through today's opening round in the light-heavyweight class.Two of the best teams in the world met on the opening day of women's volleyball, and the third-ranked squad beat the top-ranked unit. China beat the U-S 3-to-1, winning 25-21, 23-25, 25-22, 25-18. That was the first of five opening-round matches for the two teams.In gymnastics, eight teams advanced to the finals after men's preliminaries, including the United States, Japan and reigning world and Olympic champion China.
View CBS News In
CBS News App Open
Chrome Safari Continue
Be the first to know
Get browser notifications for breaking news, live events, and exclusive reporting.