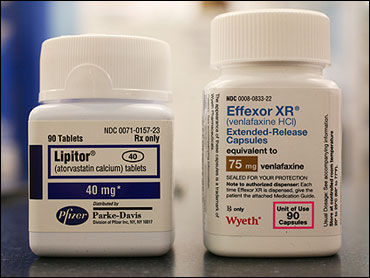 Pfizer Inc. and Wyeth have tied the knot in the drug industry's most expensive marriage this year.

Nine months after Pfizer announced an agreement to buy Wyeth for $68 billion, the deal closed Thursday, a day after the companies got final approval from the Federal Trade Commission and the Canadian Competition Bureau.

It's a smart - and necessary - move for Pfizer, changing it overnight from a marketing machine with some popular pills facing patent expirations into a diversified health care giant. That's because Wyeth is a major maker of biotech drugs, vaccines and animal and consumer products, as well as traditional pills such as blockbuster antidepressant Effexor.

Pfizer, the world's biggest drugmaker by revenue, solidifies that position by buying No. 13 Wyeth. More importantly, the combined company can improve its bottom line by closing offices and factories, slashing jobs and cutting other costs. Nearly 20,000 job cuts are expected; thousands of workers are already gone.

New York-based Pfizer, which got to be No. 1 by gobbling up Warner-Lambert Co., Pharmacia Corp. and several smaller companies over this decade, was all but forced to do a megadeal now.

It faces a huge drop in sales when its $13 billion-a-year cholesterol fighter Lipitor gets generic competition in two years. Pfizer has no new drugs likely to generate that kind of revenue, and its research labs have produced less and less in recent years, with several drugs failing in mid- or late-stage human testing.

Pfizer officials cleverly announced the big deal the same day they reported on 2008 fourth-quarter earnings. The move took the spotlight off a 90 percent drop in quarterly income - mainly due to an equally stunning $2.3 billion charge to end a Justice Department probe of illegal marketing - and a shockingly low profit forecast for 2009. Pfizer also reduced its coveted dividend by half to help pay for the big deal, a blow to loyal stockholders stuck with the lowest share price among major drugmakers.

The cash-and-stock deal gives Wyeth stockholders $50.19 per share, a 15 percent premium to Wyeth's price right before the deal was disclosed.

To satisfy U.S. and European regulators, Pfizer will have to sell about half of Wyeth's animal health business and change a Canadian distribution agreement, and the company said it will also sell its horse vaccine business.

The chief executive for the past three years, Harvard Law school graduate and former McDonald's executive Jeffrey Kindler, will stay at the helm, along with Chief Financial Officer Frank D'Amelio.

Some of Wyeth's key scientists and two of its board members will become part of Pfizer.

But Wyeth's CEO since January 2008, longtime executive Bernard Poussot, gets an enviable severance package worth $53 million, including a $24.3 million golden parachute and $18.6 million for cashing out his Wyeth holdings.

The combined company will have about $57 billion in revenue and, once job cuts are finished, roughly 110,000 workers.