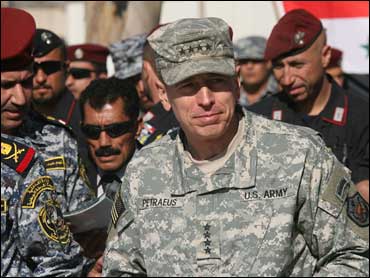 For David Petraeus, it's the beginning of year number two in the top job - and it's a year with one big question: what happens when the surge is over?

CBS News correspondent Jeff Glor met with Petraeus before a briefing in Yousifiyah - a poor, rural region near Baghdad that used to be a hot spot for insurgents.

"Al Qaeda has been pushed away and pushed around and killed, captured and so forth," said General Petraeus. "And that's what we have to continue to do."

The challenge is doing that with a lot fewer troops.

"It's very important to remember that our surge is dwarfed by the Iraqi surge that has taken place," said the general.

110,000 Iraqi security personnel have been added in the last year, along with 70,000 "concerned local citizens" - kind of like an armed version of your local neighborhood watch. Big numbers, yes, but they do not have the same training as U.S. troops, and so far Iraqi police and concerned citizens haven't always been able to work together.

We watched as Petraeus met with sheiks and farmers, encouraging them to build bridges across tribal and sectarian disputes that are hundreds of years old.

"They're treating you okay," he asked them, "Good neighbors?"

The goal is to understand what Petraeus calls the "human terrain" - something he and his soldiers candidly admit wasn't being done by the military at large two or three years ago.

"I think the Army had gotten away from talking and working with the people," said Capt. Terry Hilderbrand Jr. of the 3rd Brigade Combat Team.

"We have to live with them," said Petreaus. "We can't commute to the fight."

Whether this plan continues depends on many factors - many back home. Will Congress keep providing money? Who's going to be elected president? Petraeus knows this and for his part, says he no longer uses the word "optimistic". When it comes to Iraq, he prefers "realistic".