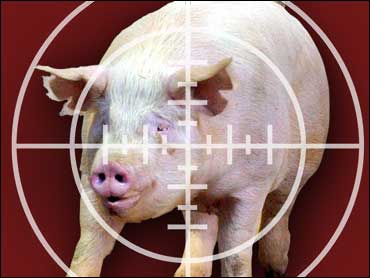 The U.S. Army is moving forward with plans to shoot live pigs and treat their gunshot wounds in a medical trauma exercise Friday for soldiers headed to Iraq.

The Army says it's critical to saving the lives of wounded soldiers. Animal-rights activists call the training cruel and outdated.

Maj. Derrick Cheng, spokesman for the 25th Infantry Division, said the training is being conducted under a U.S. Department of Agriculture license and the careful supervision of veterinarians and a military Animal Care and Use Committee.

"It's to teach Army personnel how to manage critically injured patients within the first few hours of their injury," Cheng said.

The soldiers are learning emergency lifesaving skills needed on the battlefield when there are no medics, doctors or facility nearby, he said.

People for the Ethical Treatment of Animals, however, said there are more advanced and humane options available, including high-tech human simulators. In a letter, PETA urged the Army to end all use of animals, "as the overwhelming majority of North American medical schools have already done."

The group demanded the exercise be halted after it was notified by a "distraught" soldier from the unit, who disclosed a plan to shoot the animals with M4 carbines and M16 rifles.

"There's absolutely no reason why they have to shoot live pigs," PETA spokeswoman Holly Beal said.

The bloody exercise, she said, is difficult for soldiers because they sometimes associate the animals with their own pet dogs.

Cheng said the exercise is conducted in a controlled environment with the pigs anesthetized the entire time. He had "no doubt whatsoever" in the effectiveness of the instruction, which he called the best option available at the base.

"Those alternative methods just can't replicate what the troops are going to face when we use live-tissue training," he said. "What we're doing is unique to what the soldiers are going to actually experience."

Cheng didn't have details about the number of pigs, how they were acquired or the weapons involved in the training.

The soldiers being trained are with the 3rd Infantry Brigade Combat Team, 25th Infantry Division, which is deploying to Iraq this year.

"We understand (PETA's) concerns and point of view. At the same, the Army is committed to providing the soldiers with the best training possible," Cheng said.

Disappointed at the Army's decision, PETA on Thursday instructed its 2 million members to inundate the Army with calls and e-mails.

"We're hoping at the 11th hour here that we can have this stopped. We have to hang on to hope," Beal said.

PETA believes the U.S. military has conducted similar training at other bases using pigs and goats.