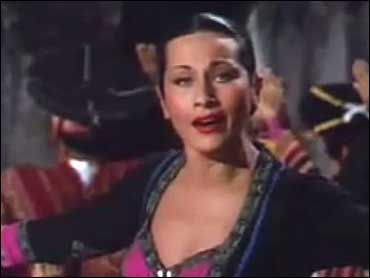 Yma Sumac, the Peruvian-born soprano who wowed international audiences in the 1950s with her stunning vocal range and modern take on South American folk music, has died.

Few biographical details are clear about the reclusive, raven-haired songstress. She was surrounded by rumors about her life and origins, many of them myths of her own making.

She claimed to be a descendant of the Inca emperor Atahualpa, and played up her Andean origins.

Dubbed the "Peruvian Songbird" and the "Nightingale of the Andes," Sumac's soaring, warbling voice - reported to span well over three octaves - was matched by her flamboyant outfits, studded with gold and silver jewelry, designed to make her look like an Incan princess.

Sumac married Moises Vivanco, a composer, bandleader and early collaborator who was captivated by her voice, in 1942, the same year she first appeared on the radio.

"She is five singers in one," Vivanco told The Associated Press in 1951. "Never in 2,000 years has there been another voice like hers."

She changed her name to Imma Sumack, with the spelling shortened to Yma Sumac when she came to the United States and signed with Capitol Records. 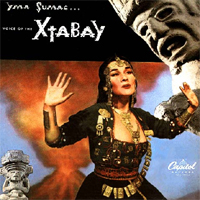 (Capitol Records)
Her first album for Capitol, "Voice of the Xtabay" in 1950, sold half a million copies and launched a decade of fame that included memorable performances at Carnegie Hall and the Hollywood Bowl in an era when American audiences had a hunger for all things "exotic."

Sumac appeared in the Sammy Fain Broadway musical "Flahooley," playing an Arab princess in 1951, and in the films "Secret of the Incas" with Charlton Heston in 1954 and "Omar Khayyam" in 1957.

She lived in Peru and Los Angeles in recent decades, and had few friends.

"She was reclusive and untrusting," Devine said. "She lived a very, very solitary life."

Devine, a professional makeup artist who befriended Sumac 11 years ago, said he would apply her makeup in her elaborate 1950s style every day during her illness.

He said the more her mind faded with age, the more she dwelled on her musical heyday.

Sumac earned a cult following among alternative and lounge music fans in the 1990s, and her music appeared on the soundtracks of many movies, including "The Big Lebowski."

An exhaustive anthology of Sumac's music, "Queen of Exotica," was released in 2005.

Sumac and Vivanco divorced in 1965. She is survived by their son, Charles.
By Associated Press Writer Andrew Dalton