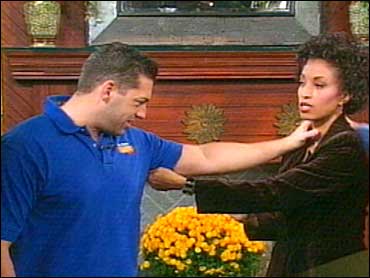 At some point in your life, you may run the risk of being a victim of crime.

Instead of feeling frightened, however, safety expert Tom Patire says you can feel empowered if you know how to protect yourself.

Patire's newest book, "Personal Protection Handbook," is full of tips for protecting yourself and your family. When he wrote this book, he went right to the source, talking to people who were serving time. They all told him, "We didn't choose the victims, they chose themselves."

Patire tells The Early Show co-anchor Rene Syler, "The bad guy is standing in the wings looking around and sees the person on the cell phone looking at the ground or the air and they become an easy mark. Most people will park their car real quick and rush to the store and forget where they parked their car and wander loosely around out there and who comes? The bad guy."

He says women in particular are easy targets for a couple of reasons. "Number one is because they always have a long list of things to do, "Patire says. "Number two, the biggest thing the bad guy says is, they like to talk and air out what they're going to do: I'm going to go here, I'm going to do this and see somebody. All they (bad guys) do is stay in the shadows and listen while we talk and that's why we become a target."

He demonstrated some of his safety suggestions. Watch the video.

Patire says the "Personal Protection Handbook" is designed to empower readers by helping them realize that they can easily keep themselves
and their families safe.

As part of his research for this book, Patire interviewed several inmates and former inmates. He says almost all of the inmates he interviewed told him that they saw women on cell phones as good targets. Anyone on a cell phone is pre-occupied with her conversation and not focusing on her surroundings.

If you have children, you're no longer worried about simply keeping yourself safe; you are also responsible for your children's safety. Patire says parents should be aware that the places where they are most likely to let down their guard are the times when their kids are in the most danger, such as in busy supermarkets or other large stores. Patire also points out that anyone who is going to lure a child away will probably strike near a door or exit. This allows them to make a fast escape.

Patire gives the following tips for keeping your child safe: