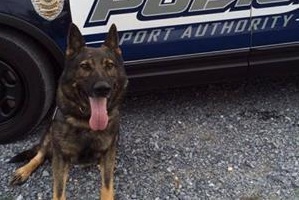 WILKINSBURG, Penn. -- A person was shot and killed, and a K9 officer was stabbed and killed in Wilkinsburg, Pennsylvania, on Sunday, reported CBS Pittsburgh.

Port Authority Police said it began when Bruce Kelly Jr. and his father, Bruce Kelly Sr., got into a fight around 3:30 p.m.

They escaped officers once, and eventually Port Authority Police caught up with them, reported CBS Pittsburgh.

"At the time they released the dog on him, he had a knife and he stabbed the dog and the dog went down. Then officers shot and killed the man," said Supt. Charlie Moffat with County Police to CBS Pittsburgh.

The dog was rushed to a nearby veterinary hospital with multiple stab wounds. County police said the dog died after being transported.

Aren was a four year veteran of the Port Authority Police force. He was not wearing a protective vest.

One witness told CBS Pittsburgh that she heard what happened between the suspect and police.

Bruce Kelly Sr. was captured, CBS Pittsburgh reported. It is not clear if he will face charges.

Nearly two years ago, a K9 officer named Rocco died after being stabbed in Lawrenceville. The day before Aren was killed, Pittsburgh Police K9 Unit had honored Rocco on Facebook.