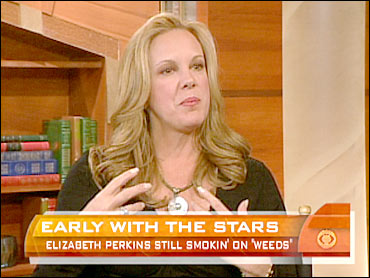 Perkins has played the complex character for four seasons, twice earning Emmy and Golden Globe nominations for her work.

"Well, as an actress, you always want to play somebody who is ultimately really screwed up and evil and always sort of walking that really fine line and, you know, no holds barred," Perkins told Early Show co-anchor Julie Chen. "But what's great about it is that our creator has also infused her with vulnerability."

Celia is many things, including, at times, a lush, a hypocrite, out-of-control, vindictive and self-righteous.

"She's married to a man she's not in love with. She's going to take it out on whomever happens to be standing in her way," said Perkins.

Unlike her anti-drug crusading character, Perkins believes that marijuana should be legalized.

"Alcohol is legal. It doesn't make a lot of sense to me why marijuana is not," she said.

Fans may remember Perkins as Tom Hanks' grown-up girlfriend in 1998's "Big," which she considers her breakout film. She said she still has the dress she wore on their date scene in the movie.

"It was handmade for me," she said. "So, yeah, and it kind of just disappeared from my trailer the last day of shooting. I don't think they even know I have it. Maybe I shouldn't have said anything."