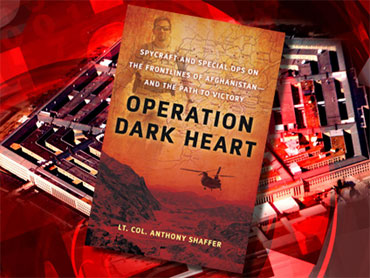 The Pentagon announced today it has overseen the destruction of 9,500 copies of a former Army intelligence officer's war memoir that it contends threatened national security.

The publisher had planned to release on Aug. 31 Anthony Shaffer's book "Operation Dark Heart: Spycraft and Special Ops on the Frontlines of Afghanistan - and the Path to Victory."

Shaffer and the publisher agreed to remove the material.

A revised version of the book, with some material blacked-out, is being released.

In a statement on the St. Martin's website, Shaffer wrote, "While I do not agree with the edits in many ways, the DoD redactions enhance the reader's understanding by drawing attention to the flawed results created by a disorganized and heavy handed military intelligence bureaucracy."

Shaffer was a civilian Defense Intelligence Agency officer based near Kabul. His book, wrote The New York Times (which had acquired a copy before the Pentagon pulled its approval), was "a breezily written, first-person account of Colonel Shaffer's five months in Afghanistan in 2003."

Shaffer's lawyer, Mark Zaid, said earlier this month that the officer ran afoul of the DIA in 2003 when he claimed that . Atta was the lead hijacker of one of the planes that crashed into New York's World Trade Center.

Shaffer's relationship with DIA worsened, until he was stripped of his security clearance and then fired, Zaid said.

Still, the Army Reserves promoted him from major to lieutenant colonel, and he was awarded the Bronze Star for his work in Afghanistan.

"Tony Shaffer has been a thorn in the DIA's side for years. Anything that Tony said or did was of concern to the DIA," Zaid said.

In 2005, the DIA censured Shaffer and on an operation code named Able Danger, which Shaffer maintains uncovered Atta as a potential threat. Zaid had to testify in his place, he said.

Revoking approval to publish the book at the last minute raises questions, Zaid says, because the DIA knew for months the book was coming out.

"Either someone woke up and smelled the roses or it was retaliatory," he said.

"That manuscript did not undergo a prepublication information security review as required by DoD regulation," said Col. Dave Lapin, a Pentagon spokesman.