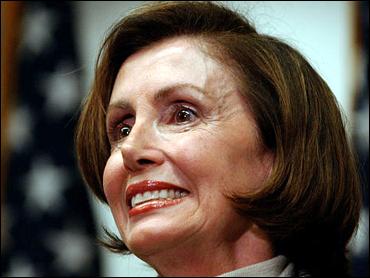 House Democrats on Thursday made Rep. Nancy Pelosi the first woman ever to head a political party's caucus in Congress.

In choosing Pelosi on a 177-29 vote, Democrats tasked the veteran California congresswoman with reviving a party stunned by election setbacks and facing a political landscape in which the White House and both houses of Congress are controlled by Republicans.

Democrats settled on the 62-year-old liberal to succeed Dick Gephardt of Missouri, who ended his eight years as party leader after an election where Republicans cemented their control over the House and won back the majority in the Senate.

After the vote, Pelosi paid tribute to Gephardt, saying he has "set a very high standard for us in working on behalf of the American people."

Gephardt replied: "I am confident that with her leadership, we're going to win back the House in 2004."

According to CBS News Correspondent Bob Schieffer, it may be a sign of progress that gender wasn't an issue. For some Democrats, the issue was whether a San Francisco Liberal like Pelosi would pull their party too far left.

"It's such a stale characterization," says Pelosi in response, "it's not about confrontation its about finding common ground, if we can't, we come here for an honest debate of the issues, I hope we can do it in a very civil way."

Twenty-nine Democrats voted for Rep. Harold Ford of Tennessee, who had decided last Friday to challenge Pelosi for the job. Ford would have been the first black to head a political caucus on Capitol Hill.

Rep. Marcy Kaptur, an Ohio Democrat who got into the race only this week, pulled out before the vote.

As Democratic leader, Pelosi is certain to be at odds with the hard-driving conservative Tom DeLay, the newly elected GOP majority leader, who succeeds fellow Texan Dick Armey, who is retiring.

Currently, both DeLay and Pelosi are their party's whips, responsible for counting votes and keeping members in line on key votes.

DeLay said Wednesday that he would "work hard to bring Republicans and willing Democrats together," but added that Republicans would "hit the ground running" in moving GOP initiatives he said had been blocked this year by the Democratic-controlled Senate.

The House Democratic elections wrapped up votes by both parties on their leadership teams for the 108th Congress to begin in January. House Republicans on Wednesday re-elected Dennis Hastert, R-Ill., as speaker, the post he has held since Newt Gingrich stepped down in 1998.

With Senate Republicans securing at least 51 seats in the election, Lott, R-Miss., will once again become majority leader, regaining the post he ceded to Daschle, D-S.D., when Democrats became the majority party 18 months ago. His chief deputy will be Sen. Mitch McConnell of Kentucky, a fierce opponent of efforts to limit campaign spending.

Lott, who took over as Senate Republican leader when Sen. Bob Dole resigned in 1996 to run for president, said he would make an effort to break the partisan logjam that characterized the last months of the Senate under Daschle's leadership. "It will be tough," he said. "There will be times when I have to do things the Democrats won't like."

Among other leaders chosen: