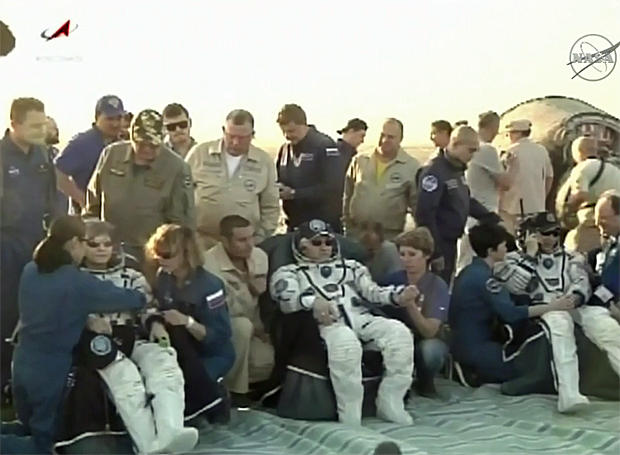 Wrapping up a record-setting flight, Peggy Whitson, America's most experienced astronaut with nearly two years of time in orbit across three missions, returned to Earth Saturday after a 288-day stay aboard the International Space Station, landing on the steppe of Kazakhstan with Soyuz MS-04 commander Fyodor Yurchikhin and flight engineer Jack Fischer.

Descending gently under a billowing orange-and-white parachute, the Soyuz crew module, scorched after a fiery high-speed plunge back into the atmosphere, settled to a jarring rocket-assisted touchdown near the town of Dzezkazgan at 9:21 p.m. EDT (GMT-4; 7:21 a.m. Sunday local time).

Russian recovery crews, along with NASA flight surgeons and support personnel, quickly reached the spacecraft to help the returning crew members out of the cramped descent module as they begin their re-adjustment to the unfamiliar tug of gravity.

Yurchikhin, Fischer and Whitson were carried one at a time to nearby recliners for quick medical checks and brief satellite phone calls home to family and friends. All three appeared relaxed and in good health, smiling and chatting with support crews under a clear morning sky.

After a more detailed round of medical checks in a nearby inflatable tent, all three crew members were to be flown by helicopter to Karaganda where Yurchikhin will board a Russian space agency plane for the trip home to Star City near Moscow.

Because of the catastrophic flooding caused by Hurricane Harvey, the NASA Gulfstream jet that normally would have met Fischer and Whitson in Karaganda was delayed. Stepping in to help out, the European Space Agency volunteered to fly the U.S. astronauts to Cologne, Germany, where the NASA jet will meet them for the long flight back to storm-ravaged Houston.

"It was just one week ago when Hurricane Harvey's weather started to be felt on Texas shores," astronaut Randy Bresnik said during a change-of-command ceremony Friday. "Since then, there's been historic rainfall that they say Houston hasn't seen in a millennium.

If all goes well, Fischer and Whitson, along with scientific samples brought down from the station, will get back to the Johnson Space Center Sunday night.

Whitson's return will close out a remarkable chapter in a storied career, one that is unlikely to be matched at NASA before astronauts return to the moon or venture on to Mars.

Whitson's total time in space over three visits to the space station now stands at 665 days 22 hours and 23 minutes, 131 days more than her closest NASA competitor, moving her up to eighth in the world on the list of most experienced astronauts and cosmonauts. Yurchikhin ranks seventh with 673 days aloft over five missions.

A former chief astronaut who twice served as the space station's commander, Whitson, who holds a Ph.D. in biochemistry, is also is the world's most experienced female spacewalker with 60 hours and 21 minutes of EVA time over 10 excursions. She stands third in the world in spacewalk experience while Yurchikhin ranks fourth.

During the change-of-command ceremony, Bresnik took over from Yurchikhin, who presented him with a symbolic "key to the space station."

"When you think about the days of training that it takes for every single day here in orbit, that four years and two months comes across as many, many lifetimes of normal astronauts and cosmonauts. The work you put forward and the effects it will have on human spaceflight's future will be felt for many, many years to come."

Bresnik and his Soyuz MS-05 crewmates Sergey Ryazanskiy and Italian astronaut Paolo Nespoli will have the station to themselves until Sept. 13 when three fresh crewmates -- Soyuz MS-06 commander Alexander Misurkin, NASA flight engineer Mark Vande Hei and Joseph Acaba -- arrive to boost the lab's crew back to six.

The space station's crew normally is evenly split between the Russians and the U.S. segment, with three cosmonauts and three astronauts representing NASA, ESA, Japan and Canada. But the Russian decision to downsize its crews in the near term gave NASA the opportunity to fill those seats with U.S. Operating Segment -- USOS -- crew members.

"This is great news," Whitson said when her mission extension was announced. "I love being up here. Living and working aboard the space station is where I feel like I make the greatest contribution, so I am constantly trying to squeeze every drop out of my time here. Having three more months to squeeze is just what I would wish for."

Her two Soyuz MS-03 crewmates -- Oleg Novitskiy and French astronaut Thomas Pesquet -- returned to Earth as planned on June 2 with one empty seat, leaving Whitson behind aboard the station with Yurchikhin and Fischer. They had the station to themselves until July 28 when Ryazanskiy, Bresnik and Nespoli arrived.

During the interim, thanks to Whitson's extended mission, U.S. research that otherwise would have been sharply curtailed was able to continue.

For the next year or so, the station's six-member crew will feature two cosmonauts and four USOS crew members. By the time the Russians resume their normal three-person staffing, commercial crew ships being built by SpaceX and Boeing should be in operation, allowing NASA to maintain the expanded USOS crew complement.