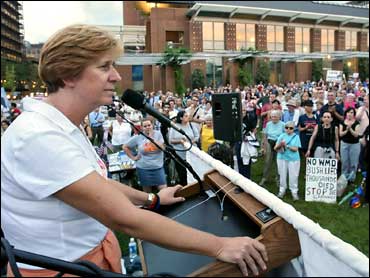 Anti-war activist Cindy Sheehan said Tuesday she was hurt slightly in a scuffle that erupted when police broke up a rally as she was at the microphone.

An organizer was arrested and charged with using a loudspeaker without a permit.

"I was speaking and someone grabbed my backpack and pulled me back pretty roughly," Sheehan said, describing the scene at Manhattan's Union Square on Monday. "I was shoved around."

Sheehan, the grieving mother whose vigil near President Bush's Texas ranch sparked anti-war protests around the country, said she wasn't roughed up by police but was jostled when officers broke up the rally and arrested organizer Paul Zulkowitz.

"I think their use of force was pretty excessive for someone that didn't have a permit," Sheehan said.

Paul Browne, spokesman for the New York City Police Department, said Sheehan had finished speaking when officers arrested Zulkowitz, who had been repeatedly warned that he didn't have a permit.

Zulkowitz was charged with unauthorized use of a sound device and disorderly conduct. He was given a court summons and released.

Sheehan, whose son was killed in Iraq last year, is calling for the immediate return of troops from the region. Her 25-state tour is set to culminate Saturday with an anti-war march in Washington.

She gained prominence when she staged a 26-day protest near Bush's ranch outside Crawford, Texas.